Success with the Tri-Bike at Le Mans Triathlon for Tobias 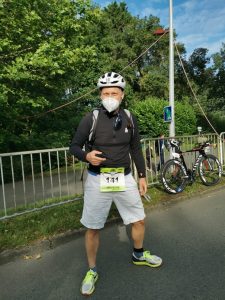 .. it had been since I toed the line of a triathlon, long before COVID. Then COVID hit with all its restrictions, postponements, cancellations. Then the race organisers in Tours decided to change the rules the night before the Sprint in June and made my tri-bike not race legal. I started to assume it wasn’t meant to be 😉

Then Mareike asked me if I wanted to join her in Le Mans. I jumped on that short notice opportunity quickly, but I opted for the S, Mareike had signed up for the M. 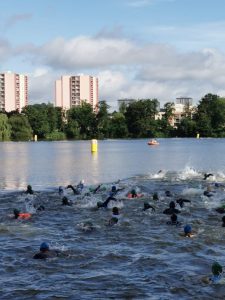 Early wake up call at 5 am (on a Sunday!), picked up Mareike in Sevres at 6 am, arrival in Le Mans two hours later. The BIG question remained, even that the emails from Le Mans Triathlon clearly stated that all races were not draft legal (I had heard that before not so long ago), would they let me check in with my Tri-Bike? I had almost made it through the referee line into T1 when I was stopped. No, please, not again! .. there was a safety pin missing on my race belt (why does it have to be three attachment points in France? The rest of the world is good with two). Mareike got me one .. and for the first time in 1002 days the Dreamliner (My Canyon Speedmax) was racked J The blue road Canyon spent the day in the back of my car.

I have never been a fast swimmer, and I don’t like going to the pool. It’s hard to believe, even for myself, but I had not done a real swim in 1002 days (main reason for not doing the M). At 10 am last Sunday that was about to change. Since I felt like I was starting again doing triathlons I opted for the first wetsuit I ever owned, a 2005 Orca Predator. It had started to disintegrate but it was good for one more swim and it still fit! 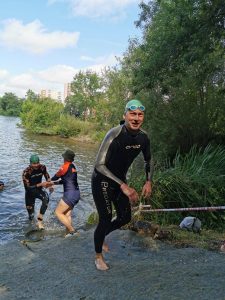 The gun went off and I was .. hard to believe .. in the water .. what a strange feeling .. not even a bad feeling.

750 meters later I got out of the lake alive and smiling .. that’s new as well.

Short run to T1, shed the wetsuit, grab your bike, go! Le Mans doesn’t give you T-times, the first timing mat is at the bike exit, so I actually don’t know my actual swim time. I wanted to survive, that I did, so that’s a win in my book. And I wasn’t last! 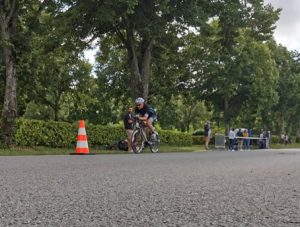 Out on the 21.5 km bike course I could feel the Dreamliner wanted to go but was slowed down by many turns over the first 13 km or so, and some short but nasty hills. I actually didn’t dare to shift to the lower chain ring in front, I hadn’t tested that before the race and was afraid it wouldn’t shift back. Did I mention the Dreamliner hadn’t been in a race for 1002 days? And, the aero position is hard on your neck muscles if you’re not used to it (anymore).

Coming back into Le Mans the Dreamliner did what it was designed to do .. go fast on long flats and downhills. How I had missed that. 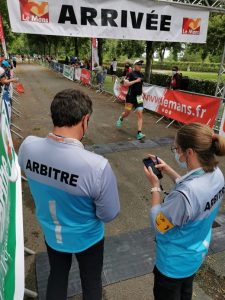 Quick T2, out on the run. 23:35 min later, I was running over the finish line. Finally, I had done a triathlon again and can add France to the countries where I have tri’ed. Overall results in no man’s land, but I don’t care.

I hope I can add two more finishes this year. Next stop: the M in Alpe d’Huez, but with the Roadie.

Thanks and photo credits to Mareike, who finished her M stongly. Se

e you on top of the Alpe and Good Luck at IM Frankfurt.

Tobias, you are a Lehmann (inside joke for Germans 😉

Finally I am not just an Expat, but an Expatri 😉 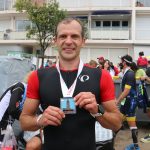 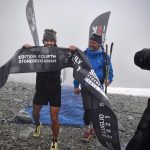