Racing is back as Anaïs & Aurélie take on Grenoble SwimrunMan! 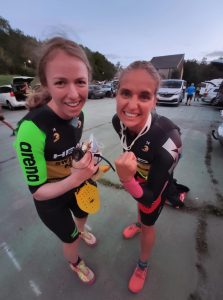 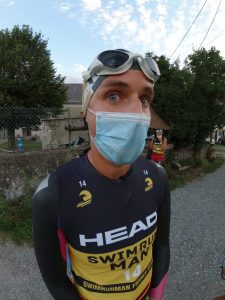 In these Covid times, Grenoble SwimrunMan was the first and unique Swimrun to take place this summer in France.
And consequently the race was fully booked with all the “cream of the cream” ready to compete : the best Italian, Belgian, Swiss and French Swimrunners in all categories (men, mixed, women). 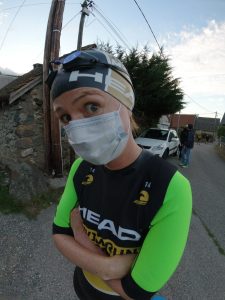 A highly technical Swimrun, both in swim and trail, with some of the swim legs of 1250 and 2250 mt, and surely the best for the end : a vertical kilometer to finish at the top of the Grand Serre Mountain at 2200mt.
Specificity for this Vertical Km : it is the shortest in distance, only 1900mt to reach up the famous +1000mt D+… en clair , super easy 😂.

As usual, a typical Swimrun race day starts with an early wake up – 5 am – so that we can drive on time to collect our bib at 6 am before the start at 7.30 . As we said earlier, the race was crowded, so the first run leg was longer than planned so that space could be created between the teams and make the start of the first swim much easier and less like a triathlon start (you know, the machine à laver effect 😉 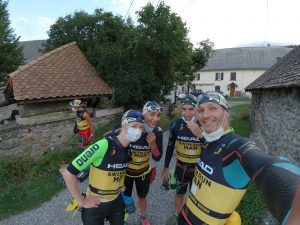 And after 5h07min we were at the base of that legendary vertical kilometer , very sure that we will make it till the end and ready to “enjoy“ that part.
Well, enjoy … first 300mt D+ at 52% were quite enjoyable. After that and after the last drink station at half distance of the 1900mt, it was bloody hell … entering in a thick cloudy area with slopes at 70% and ourselves walking « à 4 pattes » . Anaïs was leading bravously that last part cheering everyone and helping me to focus only on one thing : climbing climbing climbing. 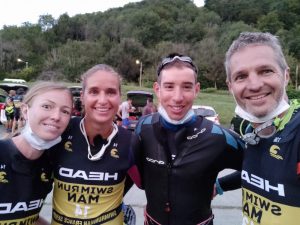 1h28 min later we got to the end of this wonderful VKM, and 6h34 min of total race time made us 6th woman ! Such timing would have made us 2nd last year, so really the level now in the Swimrun space is clearly higher ! To get some marks , first men team finishes in 4h06😳 , first mixed team in 4h45, first women team in 5h18 😳😳😳.

Anyway , it was the 5th race together and always a good one for the AAGirls !! We are now in the train enjoying a well deserved beer 🍺 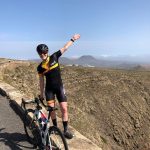 Alexandra returned to where she did her 1st triathlon, Ironman Dubaï 70.32020, February, January, Race Reports 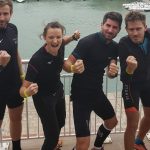