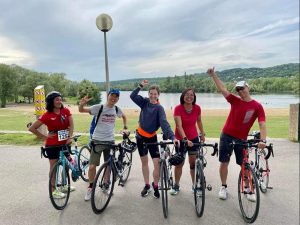 That race was not in my initial plans, but as some of my friends were doing it, I kinda fell to the peer pressure! A private triathlon coach I know is also a member of the local club organising the event, it was an additional motivation. Also, the location is very easy to reach from Paris: 40 minutes train (line J, Navigo pass works!)  from Saint-Lazare, followed by a dozen minute-ride to the actual starting area. And the 2pm start meant I got to sleep normally!  I like S or M distances, since they involve a rather limited amount of logistics, unlike L and, of course, XL distances.

No ExpaTriés members were racing this individual S race, however a fairly big delegation was here to take part in the team race in the morning.

As written above, the starting area is rather easy to locate, next to the lake and its nice sandy beach. It is a small, low-key event organised by the local Les Mureaux Triathlon club (aka “Trinosaure”, reportedly because it is the first club to have officially joined the FFTri when it was created in the mid-80s). There were around 180 participants to this race, and bibs were still available on the day. The whole installations consisted in a couple tents for bib retrieval and “buvette” and a rather large transition area. No proper bag check area, but a tent, accessible only to participants, was available to drop our things if necessary.

As the race allowed drafting on the bike, I had the nasty surprise of having to remove my clip-on aerobars at the entrance of the corral. The referee almost let me in with those still installed, but had a last minute doubt and the main referee confirmed I had to remove them. Luckily, I had anticipated it would happen and had my tools available, so the removal was not a big deal. I was just hoping it would still work, since nothing in the race guide said explicitly that long aerobars were banned. Actually, that ban is implicit when a race allows drafting, keep that in mind! A friend of mine had the same issue, but he managed to shorten his bars to the allowed limit.

I have raced a couple S triathlons in the past, both in the UK and in France, but it was a while ago, and this was the first time I raced that distance with the intention to really smash it as hard as possible, in order to assess my progression of the past few years, especially since I joined ExpaTriés last September, and also took part to a couple week-long triathlon camps in 2022.

The weather was OK, cloudy and a bit chillier than planned, and an unwelcome drizzle started falling as we were setting up our things in the transition area, but it quickly stopped and the race itself happened in dry conditions.

Finally, all the participants started gathering on the beach for the 2pm start, around 200m away from the transition corral (just beware of the geese as you walk there barefoot, they tend to have dropped quite a few nasty “presents”). The women athletes started about 5 minutes before the men, and both were good old mass starts from the lakeside! The 800m swim started with the typical mass start chaos in 23°C waters, so wetsuits were allowed. It’s never easy to find one’s pace in the open water! After a little less than 14 minutes, I jumped on my bike for a very intense 19km ride! The 2-loop route was on closed roads and not hilly, but did involve a couple bumps that made it tough if you were going all out. It also included a pair of tight U-turn hairpins that required attention. I managed to find a pair of other triathletes to relay with, which was really helpful to conserve energy though required focus in order to avoid the few potholes and minor irregularities in the tarmac, all properly highlighted by the organisers.

The transition to run then led us to the 2.5km loop, to be run twice for 5km with one water station mid-run. This part was very ParkRun-like, alternating between mowed grass and gravel paths. It is not an actual trail race, but the couple steep hills on the way were a challenge, as I was pushing through while monitoring my heart rate, which was pretty high, and also waving at my friends who were also racing or cheering!

Crossing the finish line was quite a relief, and I was very happy with my final time of 1h11. The post-finish is very simple, with lots of recovery food and drinks available, provided by the many volunteers. No t-shirt or medal, but I was not after any of those. It was also very easy to then quickly move to a good spot to support my friends who were still running. The lakeside beach offers a great spot for a post-race recovery, and also to witness the start of the final race of the day (an XS distance, including a kids event).

To conclude, this was an excellent small local event, with little fuss and simple logistics and properly organised, close to Paris. The course is challenging if raced at high intensity, but makes for a great experience, I would probably do again! 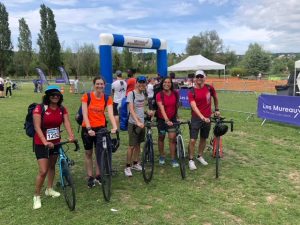 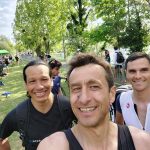 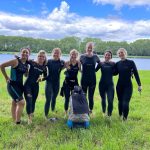