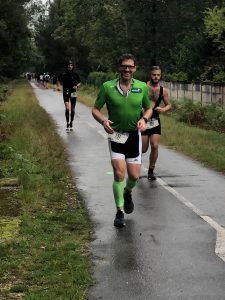 Iron Man is quite a dream for any triathlete and though I already did one in Nice in 2017, I really wanted to renew this great experience so I signed up for Frenchman XXL which was initially supposed to happen in May 2020. My objective was also to improve my performance from Nice. Alas Covid arrived and the race was postponed several times. At some point I decided to race in October 2021 even if i knew my training would not be optimal due to injuries and the summer holidays just before.

Race started in an odd way because a benevole gave me the wrong dossard number. Unfortunetaly I realised it too late since I had already put all the stickers in place. No big deal but I’ll be encouraged as « Renaud » all the race !

The original thing with Frenchman XXL is that you take the bus just before the race. The swim takes place in the lac d’Hourtin and the parcours crosses all the lake so the bus takes you to the other side. The weather was not very inviting and the wind created some swell and some haze was still there but still I was so excited to race after such a long interruption.  The starter pistol gave the signal at 8 am sharp and we’re off !

The swim goes well for me as it’s usually my main strength, especially in open water. Plus it’s a straight line so no orientation problem. Funny things is that you have very shallow waters in the middle of the lake so it’s possible to walk a little bit to rest if you need to.

On my bike after T1, the first hour is very fast for me, as it’s also slightly down wind and the road is straight and tarmac very smooth. Then things were more complicated. Though the whole course is very flat, I started to feel the lack of proper long distance training and I got overtaken by lots of others cyclists. Some upwind sections were quite complicated to ride too. I had the chance to see Alexandra & Tobias at one crossroad which gave me some strength and motivation to finish as fast as possible. 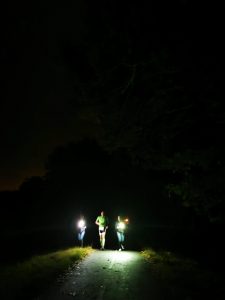 And here comes the marathon after T2 ! The parcours is composed of 4 loops of 10,5 km each. As always, it gets more and more difficult, that’s were the fantastic Expatriés support team helped so much by cheering me an running with me each loop and welcoming me on the finish line. Without them, I would not have finished this race ! Tips for myself : Get a frontlight when you are slow like me… because it gets very dark !!!! Despite my lack of training, I managed to finish the race in 14h3 minutes, better than my time in Nice 4 years ago.

Overall i’m so pleased I did that race, the atmosphere was great in general and especially thanks to the Expatriés team who was racing the M & L triathlon the other days. I highly recommend the race especially if you want to get a PB in ironman ! 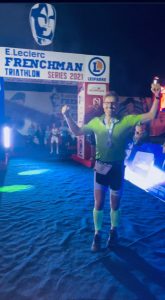 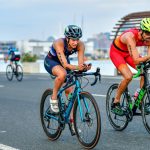 Juilie at the European Championships in València2021, September 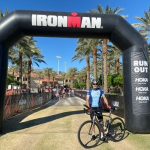