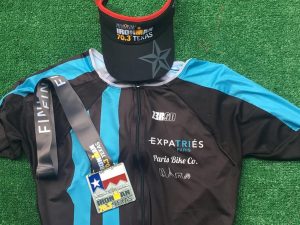 On Friday April 9th, I spent the afternoon as a volunteer helping to check-in (by appointment) the nearly 2,500 triathletes who had come to Galveston Island in the Gulf of Mexico for the Iron Man 70.3. I can attest that after a year and a half full of race cancellations and postponements, people portray a face full of concern but at the same time very hungry to compete. Do you know the known phrase “Everything is big in Texas“? It was an absolute show of carbon lenticular wheels, power meters and high-end bicycles of the latest generation that looked like airplanes.

My last participation in medium distance went back to the Deauville international triathlon in May 2019, as part of the group of Expatriès triathlon that traveled from Paris to do this race. As the race date approached, the pressure increased and the last days were loaded with uncomfortable feelings. I set my alarm clock to 4:00 am in the morning so that I could have breakfast in peace and be able to find a good parking space.

Due to the anti-covid measures, the swimming start was carried out by estimated time, not by age group and with two colors of swim cap: pink for women, green for men. It was quite windy and sunny and although the water was 22 degrees, the first 600 meters against the current were very tough. I decided to do a conservative swim avoiding punches and crowds to reduce the stress of the first minutes. I was able to get out of the water without dizziness and any big problems. 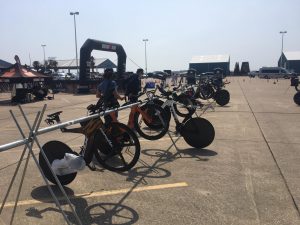 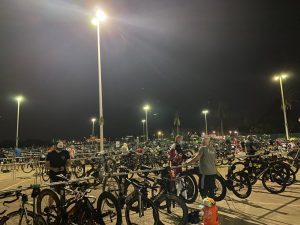 On the bike course my goal was to respect the nutrition plan and not make similar mistakes from the past. The one moment that I will remember forever was when at mile 13 and in the opposite direction, I could see the American hope to win the Ironman in Hawaii, the young triathlete from Boulder, Colorado: Sam Long. He was accelerating to try to catch up to the leading group leading by the Canadian Lionel Sanders, Germany’s Andreas Dreitz and Marcus Herbts, and Britain’s Joe Skipper.

First half of the flat bike course had tail wind conditions. I did it in 1 hour and 3 minutes at an average of 42.16 kilometers per hour. Later I realized that I should have taken advantage of the favorable conditions and push a little more, since on the 45 kilometers back I encountered one of the worst face winds that I have ever suffered. The first few miles in the Key Largo nature reserve made it difficult to stay on top of the bike as the wind was pushing us backwards. With 13 miles to go and the potentiometer read 206 watts / average and the sun getting stronger, I realized that there was more to lose than win and I decided to slow down at the last water station to replace my two water bottles. I managed to hydrate well and eat about 200 grams of carbohydrates that I had between three bars, three gels (one of them with caffeine) and a bottle with 50 grams of carbohydrates and electrolytes. My plan was to save one last bullet for the half marathon.

When finishing the bike, the first thing that comes to mind is to remember my mechanic, a person who gives me peace of mind and confidence, the Guatemalan Edgard Lopez. He had advised me to use an oval plate from the Spanish brand rotor that helped me feel less pain in legs from the transition. I put on my shoes, glasses and a cap, grab two gels and rush off to start the half marathon. I started motivated and do my first mile at 5:52. In the second mile, I felt some punctures on the right side of my stomach that force me to wait a little longer for my body to get used to the change from taking the first gel. At mile four, I hydrated well and managed to forget the pain. I went through the 10k in a little over 37 minutes. The sun and humidity were beginning to be tough. The circuit was three loops full of curves and twists and I started to see some fellow training partners. First, I met the American triathlete Kevin Thompson who encouraged me to keep up the pace. Then at the refreshment station, I saw the Colombian triathlete Carolina Cueter who has completed many Ironman circuit races. Lastly, I saw the fierce Argentine triathlete from Rosario, Jorge Atena doing this race in preparation for his big goal of the season, the Ironman Coeur d’Alene in Idaho. Seeing familiar faces gave me confidence and I felt good to keep up the pace in the second half. I finished the half marathon in 1:24:30 which would allow me to go from position 36 to the top 15 with the second-best partial race in my age group. I was only surpassed by the one who has the Mexican Ironman record, triathlete Raynard Picard. He is a successful businessman and author of the audio book “how to control your mind to overcome your own limits” which you can find on Amazon.

The happiest moment came on Tuesday April 13th in the afternoon when I received the email confirmation that gave me my slot for 70.3 Championship in Sant George Utah on September 18th 2021.

Finally, as it cannot be otherwise, I want to say thank you for the unconditional support of my family and friends, my wife for believing in me and my three-year-old daughter for putting up with the absence of her father during weekend trainings. And of course, to the great family and the best amateur triathlon club in France, Expatriès Paris triathlon for having taught me in the year and a half that I was training with them, the values of camaraderie, friendship, perseverance and teamwork. 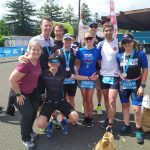