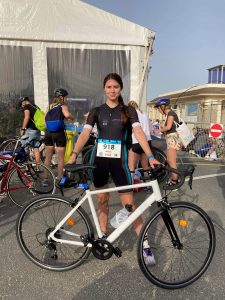 I signed up for the Deauville triathlon “Découverte” as my first triathlon of this distance for several reasons. First, the weather in Normandy is normally not too hot (except for the race day due to an important heat wave in Deauville…). Then, I absolutely wanted to swim in the sea rather than in a lake/canal because I was pretty apprehensive about the swim part. As I know the English Channel pretty well, the Deauville triathlon was my first choice. I also knew that several Expats signed up for this race. It was finally a good opportunity to enjoy a week-end in Deauville.

Before the race, I was very stressed and apprehensive, because I was just recovering from an ankle injury and the covid. Preparing with other Expats for the race helped me to get over my stress and feel as comfortable as possible for my first experience.

The swim went very well and was very fast, as I only had 300 meters to do. It was my first experience of open water swimming with a wetsuit. I am happy I managed to crawl all along. Fun fact : the bandage on my ankle came off at the end of the swim, I squatted down to take it all off when a participant said “you’re not allowed to take your whole wetsuit off”, to which I replied “I KNOW!” and then he added “are you peeing?”, to which I replied “NO!” ahahah.

The first transition was pretty long as it was low tide, so I had to run before the swim part, but also after by walking up the beach to get to my bike.

The bike consisted of one loop of 23 km. It went pretty well, even if I lost a lot of places during this part of the race. Many people have passed me by and It was really difficult for me to go faster. I was thinking of Nicolas who kept telling me “it’s only heart, not muscles, you have to spin as much as possible”. I still managed to cross the 3 hills and never unclip my feet, which I am proud of. I had finally completed a 23km/h average speed.

I was efficient in the second transition, some water, running shoes and I jumped in the last part.

The run consisted of one loop of 5 km. I used to say before the race that I was excited about the run as it is my favorite part. But it was more difficult than I imagined, due to the heat and muscles that were getting tired. I started quite fast, then slowed down to preserve myself before pushing myself again at the 3rd km until the end, where the cheering from the public was amazing.

I finally completed my first triathlon in 1h59, meeting my goal of doing it under 2h, thanks to Valentino’s training sessions and my mantra : always finish what you start ! 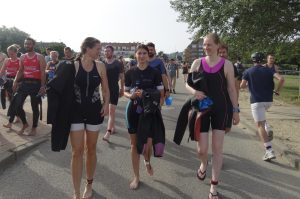 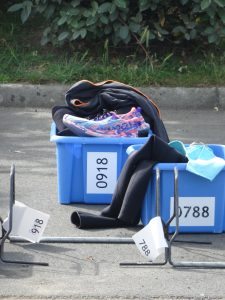 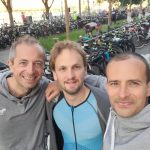 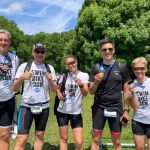