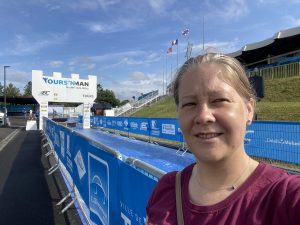 I felt pretty comfortable going into this race, normally I opt for the M distance but this time I went for the S distance (mainly because it was 2 days after my second covid jab).
Bib Collection
I drove out with some friends to Tours the day before the race so that race day would be quite calm. After checking in at the hotel we headed over to the expo to collect our bibs. It was pretty quiet as the expo had just opened and all the promo stalls were still getting setup. The security guards were a little perplexed at what to do, they checked our « pass sanitaire » and gave us a bracelet so we could come and go as we liked without having to show the health pass each time. Bib collection was quick, no queues, for the S distance we got a free water bottle as a gift (the M and L got a backpack and hat).
After getting our bibs we walked over to the bike park and the water to get orientated. The organization was a little messy with no race briefing and the route map didn’t give a direction (they only clarified the route direction on the morning of the race on their facebook page).  Testing the water it felt pretty warm which was a surprise as it’s a river and you can see the current. After asking someone they confirmed it was currently 24.7°C and there was a 50/50 chance of wetsuits being banned.
Race Day 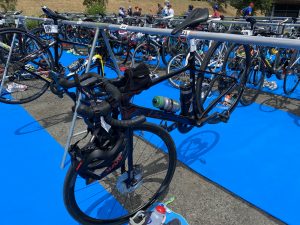 Race morning arrived and I was a bit of a loss at what to do with myself, the race start time being 4pm. We opted for brunch at a local boulangerie that also did warm food like omelettes and quiche.
The race start was a 7min bike ride from the hotel so we headed over around 1h30 before the race and I went to set up my transition area. The forecast for the day was heavy rain and thunderstorms, as I was waiting for the race to start we had a downpour for about 5min and then the weather cleared up, that was the last I saw of the rain until driving home Sunday luckily!
Swim 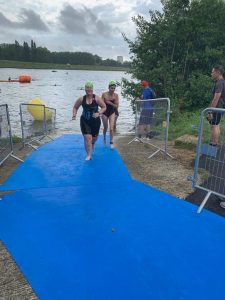 As anticipated wetsuits were banned as the water temperature was confirmed at 25°C. They started all the S people (200 participants) at the same time, we got in the water and lined up. I stayed to the side to avoid getting swam over, and the water did feel pretty warm. The water was quite green and murky with a few branches that you could see below the surface. My swim went pretty well, I was able to stay with the pack for the entire swim. Usually I’m one of the last out of the water so I was pleased to be surrounded by people the entire swim and it gave me confidence knowing I’d improved.
T1
Quite possibly the shortest transition I’ve ever done as the bike park was right next to the water. My transition time was 1min38 and that included putting socks on! (note the M and L were on the other side of the road and much longer).
Bike 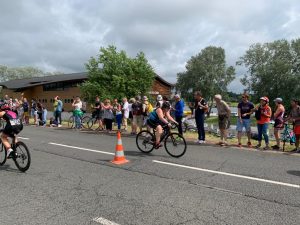 The bike was 4.5 loops and the worst bike course I’ve ever done, lots of corners, a 180° turn every lap, and a terrible road surface with lots of large dangerous potholes (note the M and L was a different route and a lot nicer). My bike time was pretty strong for me and considering all the cornering I was pleased to get through it without falling or getting a puncture.
T2
Another quick transition of 1min25 this time, just a quick shoe change.
Run 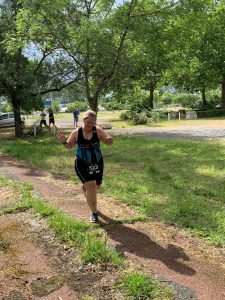 The run route was definitely a highlight as you got to run along the river and around a park, I’m not a fast runner so I was inevitably disappainted with my run time, but I did run the entire route so this was a positive.
Reflections
They only gave medals for the M and L distances which I thought was disappointing, the S distance people got nothing as they crossed the finish line (except regular ravito stuff). I would definitely not recommend doing the S distance as the bike route is super dangerous but I am tempted to come back next year and try the M. At 2hrs drive from Paris it’s pretty easy to get to.
Toursn’man – The race season begins!2021-06-222021-06-22http://expatries-triathlon.com/wp-content/uploads/2017/10/expatries_logo-sansfond-e1509014842840.pngInternational Triathlon Club of Parishttps://expatries-triathlon.com/wp-content/uploads/2021/06/3fb13bea-a786-43bb-bf26-af6eb28a2d3a.jpg200px200px 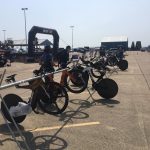 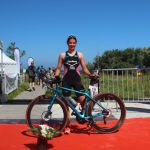