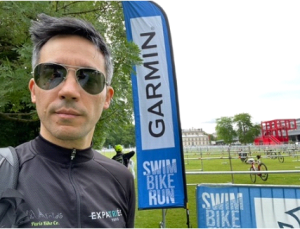 Not being very sportive most of my life I decided about a year ago that it was time for a change. So, I started running in April 2021. As I found it boring and didn’t really see myself doing (semi-)marathons any time soon, I also added Swimming in my weekly exercise routine. Being Dutch and having used bicycles all my life (purely as a mode of transport) it was a logical step to add biking in to my routine as well and that’s when I started looking for a club to ride with in the weekends.

I still remember the first club training that I joined, it was a Saturday brick session early January in the freezing cold, close to zero degrees, but I enjoyed it a lot!

From here onwards I had set my objective for the year to do the Paris Olympic distance with two sprint distances as preparation (Cepoy and Chemin des dames). 6 months of hard training averaging 5-6 hours per week, with ups and downs (COVID, injuries…). So now it’s time to perform!

Saturday, pick up Bib and drop off bike in transition area was mandatory as an early start at 8AM was announced. For the rest the focus was on final mental preparation by going through the plan again with target times, average heartrate targets and average speed, pacing and nutrition strategy. I am a strategist and enjoy being well prepared with smart, measurable, and realistic targets throughout the race. To be fully energized for the race day, I followed a carb-loading plan found on triathlete.com magazine which basically focusses on intake of high glycemic foods throughout day with 3 meals and snacks in between them. Last step for motivation was watching YouTube video of the sub7/sub8 records set earlier this month. 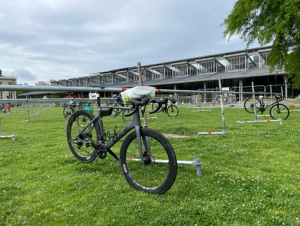 Starting the day. Waking up at 5.30, banana and coffee for breakfast. Ubering to parc de la Villette to save some strength. Final preparations between 6 and 7 in transition zone and all ready to start. Next step is to walk to the swim start which was a 25min walk. During the walk I realized that the 1500m swim looks pretty long!!

Swim. Start of my wave was planned for 8.20 however delayed due to security reasons, as a result when the first wave finally starts with 30 mins delay at 8.30, the organization decides to shorten gaps between the waves and within 10 mins all 2000 participants are in the water. It also appears that people of all different types of levels are mixed out over the waves it seems like more than half of the participants are swimming breaststroke and are zigzagging through the canal with people stopping in the middle of the water from time to time. In any case, I just swim, bumping into people and zigzagging through the field and happy to see the 750m mark with approx. 16mins elapsed on my watch. The second part I am getting used to it and continue at a slightly lower pace as I was ahead of my target time of 35 mins. While climbing out of the water, I am very happy with my split time of 33m which makes me feel comfortable to reach the sub 3hrs target. Before entering the transition zone, the organization has put up a large rain shower to help rinse of the not so clean canal water! When reaching the bike park I realize that most bikes in my zone are still there which is a good motivation to continue the race. No difficulties in changing into bike gear, however unfortunately there is a huge queue for getting out of the transition zone. Total T1 time of 7mins… (vs target of 5mins) 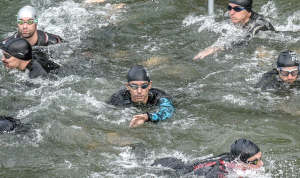 Trying to spot some free space 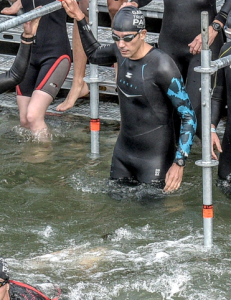 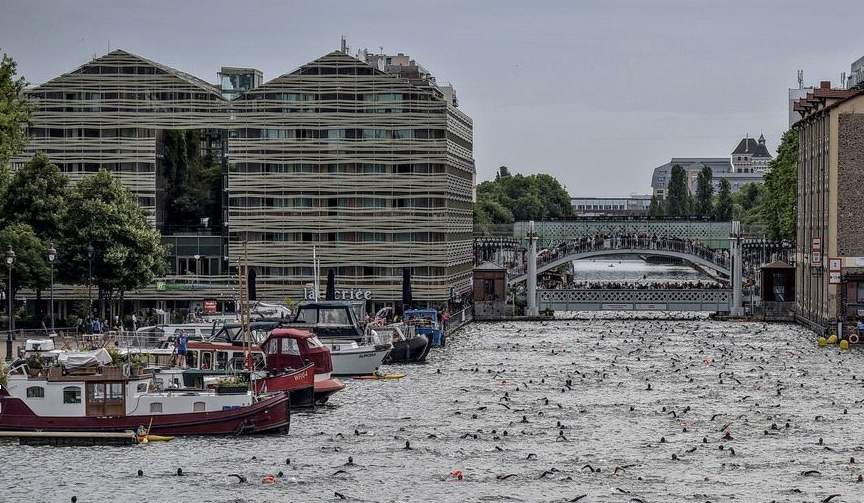 Bike. After jumping on my bike, the route is directly congested resulting into another stop and queuing before being able to really start the race. Lesson learned, next time need to sign up for one of the first starting waves rather then the 4th one. I am starting carefully, as the route is super busy with S and M distances being on the road at the same time and large differences in bike handling competencies and speed. In the first KMs also witnessing a car leaving his parking and driving into a group of 5 bikers just in front of me. Nobody seems to be hurt badly, so I pass the car on the left and continue my race. The first 7 KMs have quite a few turns and small passages until reaching Quai des Celestins. Then I miss the exit towards the Olympic distance route and must turn around to get back on my track…. From here on there are fewer riders on the road and it becomes a more pleasant ride. Along the Quai I connect to small group of riders which grows into a peloton of 20-30 riders, and we cross Bois de Boulogne with speed between 30 and 40 KMH. The group falls apart on avenue Foch and I continue most of the ride solo and occasionally tailing on someone. When reaching the 30k mark I am checking my stats once again, 35 KMH, 170 BPS average, slightly above target so I decide to take it a bit easier the last 10K to be still in decent shape for the run. However, I push the wrong button on my watch resulting it into moving into transition 2. So, the last 10K I am blind on data, however as I know I am below my target no worries. Before entering back in there are a couple of 100 meters of the most horrible cobble stones resulting in horrible shaking… but the bike leg is already finished. The transition goes smoothly, and I am starting the run, with a total elapsed time of 1h56 (target 2h03) I feel confident to reach my sub 3hrs target. 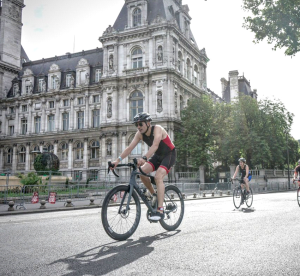 Passing along the Louvre 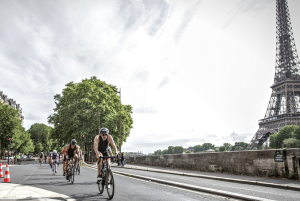 Run. The first part of the run was a bit weird, a narrow path where it is difficult to pass people and then crossing the canal over a bridge with staircases on both sides…. This kind of beginning is not great and results into a cramp/muscle ache in my left leg just above my knee during the first KM. I stopped for a bit to stretch and massage, but it didn’t help. Giving up is not an option, I trained for almost 6 months to achieve this goal and still motivated by some encouraging words of Sylvain earlier in the season when asking how to deal with injuries: ‘Sometimes the best remedy for injuries is just to continue ‘ . As such I continue my run all a bit limping and I try to mentally break it down into 4 blocks of 2.5k. First 2.5K, calm pace, surviving and the pain becomes manageable. Second block, I start following someone who runs a steady 5.30m/KM with so much ease and I am using him as my pacemaker nearly till the end of the race. Third block, halfway down, crossing bridge to other side of the canal and running 2-3K on a bit of a dirt track. My friendly pacemaker catches up with one of his clubmates and they start chatting till the end of the race (these guys look so fit, it doesn’t look like they are racing, but just training for an Ironman championship). In any case they really made my race much easier. Last block, leg starts hurting again, but I don’t care. When passing the 9K marker getting the feeling of almost being there, however it is rather deceptive as 1K later (according to my watch) the finish line still can’t be seen and when checking later in reality the 10K is 10.85K. so the last 800m are feeling very long! And then crossing the finish line at 2h54 ! Wow so happy that I made it and super happy with the result! 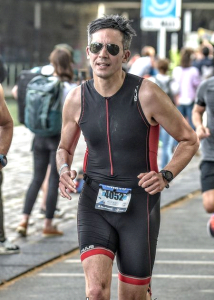 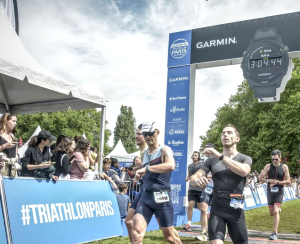 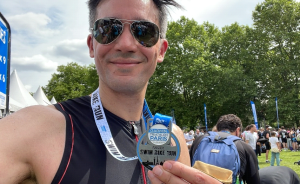 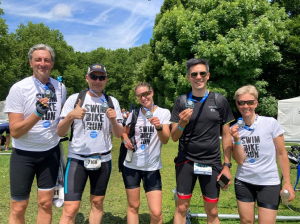 And a group picture!

More races to come! Thanks for reading! 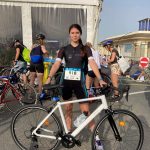 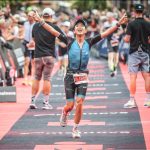