Fantastic performance for Kathryn in the Tours’Nman L 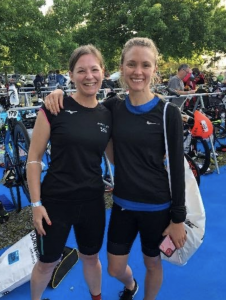 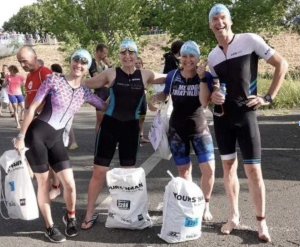 That was the question I asked myself as we entered the bike park to set up our stuff and were told it was a no wetsuit swim as the water was warmer than 24.5 degrees. This was a bad idea – deciding to do a half ironman on no swim training due to lockdown and still recovering from bruised ribs from a fall on the bike three weeks earlier, and now not having the wetsuit from stopping me from drowning in the river!

Ok – so I must be mental. Now it was time to get mentally tough. I could do this and it was going to be fun.

There were a good number of Expatriés doing the L-distance and we were racked in transition next to each other. They were funneling people to the water’s edge two by two to dive off the pontoon (Sylvain’s sessions in Cergy definitely helped prepare for this) and I entered the water with Faye, my coach, with Mareike and Sean diving in immediately behind.

The swim is where I need to dig deep to find my mental strength, and need to constantly tell myself that I can do this. I always freak out around 300m where I truly believe I cannot make it with so much still ahead of me, especially as teammates start to swim past you. Don’t panic. Remember to stay calm and do my own race. There will be enough time to chase them down on the bike… 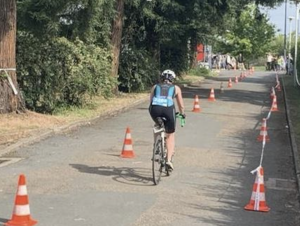 Having lost a few valuable minutes to self doubt, I managed to get my head in and decided to break the swim down into sections, counting number of strokes to get to the next bouy, or 20 strokes of technique / bursts, as if we were doing the drills in Cergy. Tried to remember to glide. Although not my fastest 1.9km swim ever, I met my objective of a) not drowning and b) sub 45 minutes and I actually enjoyed the feeling of not having the wetsuit restrict my arm movements. Added bonus with a no wetsuit swim is not having to get out of it during the transition… and this was a long transition of 400m run to cross back to the bike park.

I tried to run as quickly as possible on tired legs from having to kick in the water with no wetsuit to keep them up, as I knew Mareike and Sean had existed the swim ahead of me. Luckily they were just putting their helmets on as I reached my bike, so I didn’t hang around as I tried to chase them down, with about 2 minutes to make up on them…

Now the bike course was what I was looking forward to. This was a two loop relatively flat course with only one small hill to climb twice. As such, I was looking forward to see how fast I could push myself over the 90km; and now I had the added incentive to chase down Mareike and Sean. How far ahead had they managed to get in those two minutes? The answer was 15km, as I saw the back of Mereike come into view on the first climb.

The bike was a lot of fun. The road surface was great and I was able to spend the majority of the time on the tri-bars. I had managed to cover 34km within the first hour, so on target for a sub-3 hour bike. Hearing the cheers from Sonia and the Lets Run Paris team as I came towards transition spurred me on. Slightly disappointed that the bike leg was slightly short at 84.5km, I had managed to hold an average of over 32.5 kph for the distance and completed the bike in 2h36.

Quick gel in transition, cap on, change sunglasses, and back out of transition onto the run course. Hearing cheers from Tobias and John as I came out of transition spurred me on and it was now time for another mental push and “re-set” of focus and dig deep through the pain. My left ankle had started to twinge at about 70km into the bike and it was not happy at the start of the run. 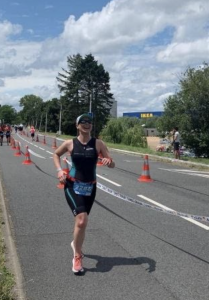 I told myself it would be ok. The first 5k were going to be painful. Suck it up and accept it. I always get cramp in my inner thighs running off a 90km bike, but I told myself this will pass as the pain moved from my ankle, to my inner thighs and then to my lower back. I was 3km in and suffering, which is when I felt a massive slap on the back and shout of Allez Madame President, as Dany and Ludo came past me on their 10km run of the M distance race. This gave me an amazing burst of energy and just the encouragement I needed to take my mind off the pain and settle into a rhythm and my run plan. Start the first 5km steady under 5’45, then pick it up for the middle 10k to 5’30, hold on for the last 5km then pick up the pace for the last 1km. I also let myself stop at every aid station to get in the iso drink as it was hot.

I have never managed a sub 2 hour semi marathon in an L distance and this was my objective of today, which in the last 2 km I thought I was going to have miscalculated with the drinks stops. The cheers from Tobias and Nick at half way and then from Sonia and team at 19km pushed me on and then it was a race against the clock to sprint round the bend onto the carpet and under the arch to cheers from the Expatriés supporters.

And that’s when I realized I had more than beaten my objective of just finishing, ideally within 6 hours, when Tobias shouted out my time to me. I had smashed it with 5h27 on the clock and was 7th in my age category. 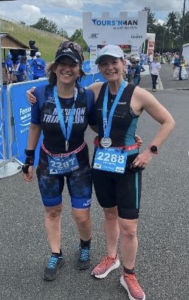 It had been a great race and made even more incredible as it was the first race back since Covid and being able to race together with teammates after so long. With XS, S, M and L distances over two days, we had club members racing both days and it was a great weekend away together. The weather had held, the atmosphere was great and the support from teammates during the race was amazing. Being only a couple of hours from Paris, I would definitely recommend this race.

So – are triathletes mentally tough, or just mental? I would say we’re a bit of both! 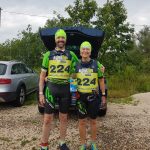 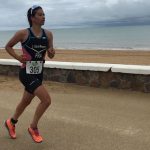