My first triathlon experience can be summarized as a culmination of feelings, which end at great satisfaction. Feelings include excitement, nervousness, self doubt, fear about injury, but once the ball starts rolling the training of the last two months starts to show its results, and calm and collected effort replaces the various feelings.This first race also showed me the areas where I need to concentrate on my training, and what some of the tricks of these competitions are.

To enter my first race with Cesar was very beneficial and he is certainly a good partner to enter your first race with. I thank him for his calm and collected demeanor which contributed to me NOT FREAKING OUT. For those who like to challenge themselves, and who are not content with muscle aches only from one sport activity, this is a must do event. This was my first triathlon race, and am hoping for more to come.

I’m not really experienced at triathlon. I just started practicing it 1 year ago but I really enjoy it. This was one of the easiest swims I’ve done. We were helped a lot by the stream. I did the 750 m in 8 minutes. After a terrible transition of 3 minutes, where I lost my swimming cap and my goggles… I did pretty decent cycling  (a bit less than 40 mins) and managed not to be passed by many people.

The second transition was slow also, but this time (sighs…) because I had forgotten my “porte dossard”, I had to quickly take off and put back on my sweatshirt – but this time in reverse so my dossard was in front… People and referees were laughing when they saw me scratching and trying not to be strangled by my own clothes while running. The 5K run was flat and it was actually a bit sunny. I did it in 23 mins.

I recommend this triathlon for all the weak swimmers that want to test themselves at the beginning of the season. The race is not that difficult. That being said this triathlon is relatively competitive. Even with a overall time of 1h15, I am at the bottom of the ranking (for my category). But taking part in a triathlon race is always fun. This one was very well organized (volunteers were placed at every turn on the bike course and proved to be very efficient at stopping cars)…and it’s not far away from Paris. I’ll do it next year 🙂 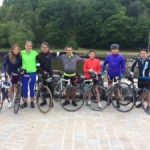 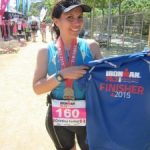