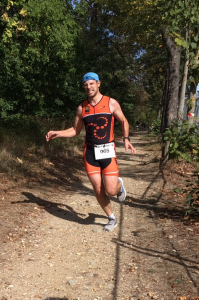 On Saturday 29th of September an open duathlon were organized by the Stade français in the Bois de Boulogne.

We were only 97 at the start (but 3 expat), mainly due to the lack of publicity I think. Few supporters, but for the first time I received cheering from the referees as Wippy was one of them 🙂

Actually I was made aware of this race by a Belgian friend whose girlfriend participated in the club championships the next day. It was the Sprint format, that is 5km run, 20km cycling and 2.5km run with drafting allowed.

Having done the 70.3 of Nice two weeks before, I was not really prepared for such short and fast race but it was lots of fun. I did not know before, but the first run is the most important part of the race. I am not a fast starter, and unfortunately the time I find my pace, the first run was over. I maintained a rythm of 4’/k in a bit technical course in the wood and around the Grande cascade lake, which was ok, but not enough to be in a good pack for the cycling part. 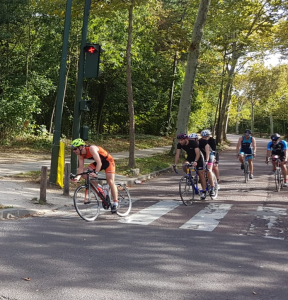 I found then myself in a pack with riders rather tired and reluctant to make efforts. But I did not think too much and lead the pack most of the time. We were not strong enough to catch a new pack and I only gained a few positions. The last run was only 2.5k, that I started with a right calf cramp that hopefully disappeared after a few hundred meters. Again, hard to make a difference on such a short distance.

I gave what I had left and finished tired but happy this duathlon “at home”, in 1h13’ (34th/97). I will do it again for sure next year and I recommend it for all those who love short intense efforts! 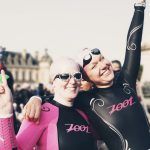 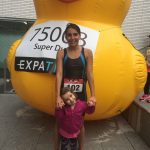