Stéphanie and Bettina take Augustine to her first triathlon in Beauvais 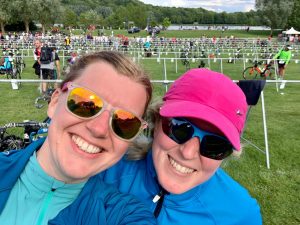 Unfortunately, in November 2018 I got injured, a periostitis (or whatever it is called in English? I’m not sure, but the pain in the shins that every runner has experienced once, became quite bad for me, with oedemas and pain even while standing still)

I still wanted to give it a try knowing that an objective would help me train and follow a plan. So after discussion with Bettina, checking the logistic (access by train, dates…) we decided to enter Beauvais triathlon.

In parallel, from February I started training with Valentino, to improve my running technique, which is by far my weakest point, and also to cure this injury by learning how to be more efficient while running.

I wrote my own training plan for the bike and swim, and for the run, I followed each and every instruction given by Valentino and by the physio, did all the runs, all the stretching sessions, all the painful foam roller ones as well, icing my legs as often as needed… 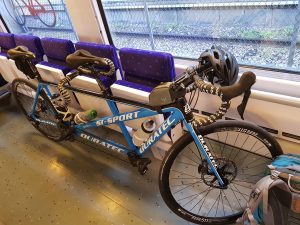 And the day arrived rather quickly! Suddenly we were Saturday the 15th of June, in the morning. Bettina came to catch Augustine and myself, and off we were in the TER to Beauvais. Travelling with a tandem is always a bit of an experience, but once again, we did very well!

We arrived at Beauvais well on time; with a very nice weather (the forecast was quite bad, so that was a relief!)

I had been in touch with the organisers in advance, telling them that I would participate with a tandem, asking them to have a spot as close as possible to the bike exit, which they provided with no problem.

The transition area was very nice, wide enough even for the tandem, we got everything ready and then off for a quick swim warm-up. 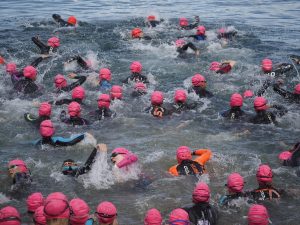 And then it started.

With Bettina, we had very little training of swimming attached by the leg, so that was a big worry for me, but when the washing machine started, it went all rather well, we had to stop a few times to tighten the link, I hit a few people (probably including Bettina, sorry!) and got hit by others, that’s part of the game!

We finished the swim in about 39mins, a tiny bit slower that what I’m used to (let’s not pretend) , but again, swimming tied to someone is another experience… 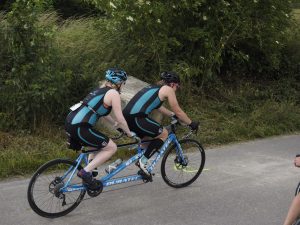 And then ran to the bike! 3 loops of 14km, including a small rather unexpected uphill (thank you Bettina for managing the gears so well, it was a bit tricky as we didn’t see it coming at all !), a windy flat and a nice downhill, when we had fun and reached 65kph! We finished the bike in just under 1h30, at an average speed of 28.6kph. This time I didn’t save any energy, I was doing my best on the bike, trying to not think about the run, and I managed to eat and drink enough which made things a bit easier I suppose (thank you Martin for all the good advices on nutrition)… Being cheered by the volunteers, the spectators and even the other participants made this a great ride. As Bettina said last year, if you want to be cheered during a triathlon, do it on a tandem! 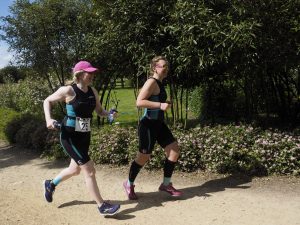 Finally, the run. I was quite worried, but very motivated; I really wanted to go as fast as I could, no matter the pain. However, I have been lucky that Bettina was looking after me and my speed as I started way too fast under 5‘15min/km (which may seem like a nice jog for most runners, but not for me) so we quickly slowed down to something between 6’ and 6’30 / km.

We had decided to run with a link, even if we had never tried it before so all the runners realised that that was us on the tandem, and more cheering came up as people were passing by us. 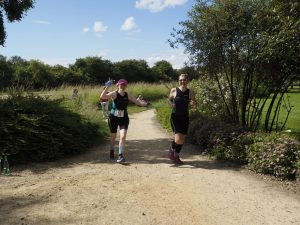 I think from km2, my calves started to ache, and from km 6 my feet started to feel numb… I had to stop to check that my shoes weren’t too tight, which they weren’t… So I kept going with the pain and the weird feeling of having stones instead of feet (if anyone has ever experienced that, please let me know) and Bettina always by my side cheering and pouring water on me at each drink station.

And then I finally saw the finish arch, Bettina told me “c’est la deuxième” but I had no clue what she was talking about, I could just see the finish line…. And only when I passed it, sprinting all-in, did I realise (or did Bettina make me realise) that there was another arch few meters away…. So sprint number 2… To finish my first M triathlon in 3h17’. 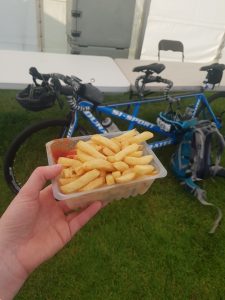 I would recommend this triathlon to everyone: the water is clean, which is very rare this close to Paris. It is easily accessible by train/bike, the bike is rather easy once we know about the little uphill (although I don’t have many points of comparison) and the run is a nice 2 loops flat path run around the lake. The organisers and volunteers were all super friendly, and they had a buvette with great fries for after the finish line! I enjoyed every minute of it! Thanks again Bettina for allowing me to run it ! 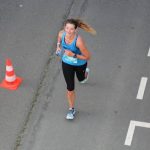 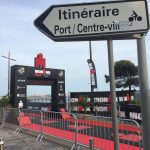