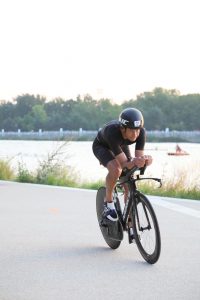 Leading up to Vichy, every race I signed up for had been cancelled or postponed this year (including 3 half-IMs, 1 full-IM, 1 Olympic, and 1 Sprint so far), so I was very excited to finally get to race in Vichy. Vichy 70.3 is one of my favorite events. It’s about 3 hours by train from Paris and has plenty of AirBnB options near the Ironman Village. As expected, this year was a little different. For example, there were no longer any side events like Ironkids, IronGirl, underwear run, pasta party, or the athlete finish area with free massages, live music, beer on tap, etc… All these were cancelled, which is understandable. The most important thing was the 70.3 and full-Ironman events, and those were excellent.

My race day started very early, waking up at 4am. Enough time to eat breakfast, prepare my things for the day, and arrive at transition by 5:15am. After checking my bike for tire pressure, attaching shoes to the pedals, nutrition, and turning on the bike computer, it was time to get into my wetsuit and head to the swim start. The race start was at 6:30am! I lined up towards the back of the 32-33 min corral. With the rolling start in place, 6 athletes started entering the water every 5 seconds. 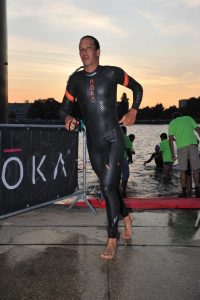 At 6:34am I dove into the water and started my swim. Since I had a long day ahead, I swam the first 300 to 400 meters nice and easy. I then got passed by a guy swimming a little faster so I immediately “jumped” on his feet. It was the perfect person to draft. I had to swim hard to stay on his feet, yet it was sustainable for the duration of the swim. He also lifted his head up really high to sight, so I knew (or I thought) he would swim in a straight line. After the turn-around, unfortunately he started going off-course. It’s a common mistake people make on the return leg on the Vichy swim course. At that moment I had to decide whether to stay on his feet or swim on my own and stay on course. I was getting a good draft, so I decided to stay with him even if it meant swimming a little more distance. I think it was the right decision but I will never know for sure. I exited the water in 33:06. Swimming is something that I really need to improve, but either way, I was very pleased with my swim split. 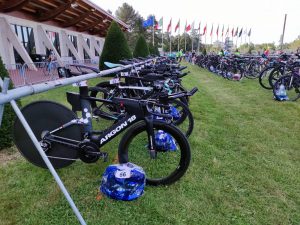 T1 was nothing special. I went through my transition in just over 2 minutes and straight onto the bike course. The Vichy bike course is tough! Back in 2018 it was a fast & mostly flat course, perfect for PR’s. In 2019 they changed it to a hilly course, which now includes 1,200m elevation gain in 90km. The elevation doesn’t tell the whole story though, what makes this course so tough is the poor quality rough asphalt and constant rolling hills. I had a very good bike ride, pushing decent power but also holding back to save my legs for the run. I mostly passed people on the bike, but I did have a few guys riding “with” me. They would pass me and I would drop back to the legal non-drafting distance.I was happy to stay behind but if the pace dropped, I would re-pass and kept pushing forward. This kind of back and forth is common, especially with faster riders, but as long as everyone follows the rules I don’t mind it. 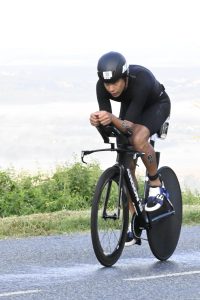 It can actually be helpful as long as you don’t start racing each other, and instead think of it as helping each other by taking turns pacing at the front. There were a lot of motorcycle referees on course to keep things in check, which I definitely like. I was feeling good, so with 30km to go I decided to push harder and drop the guys riding near me. This was especially fun as there is a long false-flat downhill section where I reached close to 60 km/h for a good long while. This part also had nice smooth pavement. It’s a big reward for all the hard climbing prior to that, and it’s my favorite part of the bike course. In the last 5km of the bike leg you go through a lot of small city streets with many 90 degree bends, until finally reaching transition. Bike split: 2:31:26 (34.5 km/h average). I was definitely happy with this bike split considering the amount of elevation. 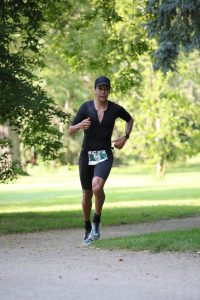 T2 took a little longer. Here I put on my socks, running watch, and a hat. A half-marathon is long enough that it’s worth taking extra time to put on socks to avoid blisters. I was out in about 3 and 1/2 minutes this time, a little bit slower than I would have liked, but T2 was bigger than T1. (It was not the same transition zone) 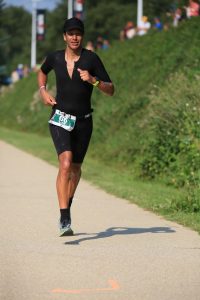 The run started out great! I was feeling good and averaging 4:07 per km. My pace was very consistent for the first 10km, which I completed in 41min. The Vichy run course consists of 2 loops around the water, over some bridges, through some parks, and in the city. After the first lap you run right past the finish line and head out for a 2nd lap. I started making calculations in my head (something I like to do while running), and at the current pace I was on target for a 1hr25′ half-marathon. Unfortunately, on the second lap I started struggling. A half-Ironman is a long hard intense effort, and it’s difficult to digest food and get the nutrition you need. I have never quite figured it out. My stomach started hurting and my legs were starting to get tired. At this point I thought to myself – “how does Lionel Sanders do it?” He can suffer more than anyone and won’t slow down for anything. It’s incredible what he can endure. I’m unfortunately not that mentally strong, and I started to slow down. For the next few kilometers, I ran about 10 seconds per km slower. A few kilometers later, another 10 seconds slower. This may not sound like a lot, but by the end of the race I had lost close to 3 minutes on the second lap. Interestingly, even though my pace was slowing, my heart rate was going way up! I think I got up to 180 bpm towards the end. This is probably because I was desperately trying to maintain my pace. 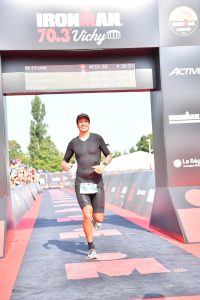 At last I reached the finish line. It’s funny how you always find that extra gear at the end of a race. My pace came back up for the final kilometer, and I had a great race finish. I was extremely happy with my overall performance. My run split ended up being 1:27:41. As I crossed the finish line, I looked back and saw my finishing time of 4:38:07. (6th place finish in my category 😄) Until next year! 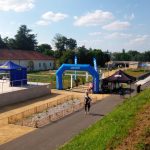 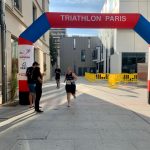