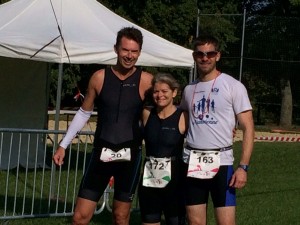 We arrived in the dark hours of the morning last Sunday for the 1st annual Noisy-le-Grand Sprint triathlon. We peeled ourselves out of the warm car on the dot of 7am to discover that the sole light source for the dossards table was the headlights from a van! We learned straight off that there would be no time chip for this event.

This location was the T2 and arrival area. The bike racks had numbered stickers (6 to a rack so a tight fit) where you left your shoes and anything else for the run.

Aymeric picked up his rented wetsuit and we headed off on a 4km cycle along the Marne. At that point the 6°C air temp made us regret not bringing gloves.

The departure/T1 area was on the site of a Base de Loisirs in Champs sur Marne. We were given a 5 litre trash bag; everything had to be placed in the bag before cycling out of T1.

By that time the air temperature had warmed to about 10°. Testing feet in the water, it seemed the temp might be less of an issue than the smell… Laetitia later said when we all jumped into the water, quite a scent rose up to greet her…

The course was a 750m triangle. The shock of the water temperature on my face and being encircled in it felt like I couldn’t breathe even when I tried breastroke. Outside of the leaders, the rest of us were splashing about trying not to drink much of the water which tasted just as lovely as it smelled… I even resorted to sidestroke a couple of times because my brain was frozen.

I focused on the 1st buoy so I could be 1/3 done. When we swam around it, I looked up and saw it was still in front of me. In my mind I thought…I can’t believe there are 2 buoys on this section, I’ll never be done. I was sure I was still on the 1st leg.

When I couldn’t resolve how I was looking toward the shore once I got around the 2nd one, it finally came together in my brain.

Once in the transition zone I was so cold I couldn’t remember what I was supposed to do. I decided to throw on a top and jacket (zipped down so I it would go over my head quickly). I didn’t want to be wet in the cold air – particularly riding at the speeds I do =)

The bike course was 17km including a return back on the flat 4km stretch we rode on the way over and then 4 loops around a 3.3km course. It was fabulous! I used all the gears I have on my bike and more. I have never so enjoyed a ride. I could have done 10 loops.

It went up and down and turned to the right and to the left. It was so much fun. Our very own Marie Anne was volunteering on the bike course on a downhill stretch.

It was just about impossible to draft on the course with no straightaways after the 1st 4k (which was also on a narrow bike path).

Lots of volunteers were signaling the upcoming turns. At the end of each loop a team called out the numbers of competitors as they rode by in order to record their passage.

Getting to T2 I easily found my shoes (at that point not that many were still waiting to be claimed). I threw off my tops noticed the bottom half of my trisuit was still soaking wet.

For the 1st 3km of the run I could barely feel my feet they were so cold, and I spoke to many other people who had the same experience.

The route was 1.25km up and back 2 times. It was a flat course along the Marne. I saw Sean at the end of his run just as I was starting mine! We collected string necklaces at each of the 3 segments.

Arriving near the end of the pack has the great advantage of providing a sea of people cheering – as they just want you to be done already so they can get their prizes and go home!

For the 1st time ever I had the presence of mind to raise up my arms in the celebration that a year ago I had done just one XS open water event and this year I had just finished my 5th (3rd S) event even though sick with a cold and in freezing conditions. Not bad for an old lady…

Conclusion: I would definitely do the race again…only if it was earlier in the season. I definitely would not get into that kind of water again unless I was training for the Norseman. However, there was a great ambiance as it seemed the entire town was participating. The organization was very interactive. The Noisy team was anxious to hear our opinion; they looked very proud of their event. They seemed to have a number of local sponsors and gave away helmets, wet suits etc. They had a bike technician on site with every tool imaginable to help with repairs. They even rented a van with a 1,000 liter water supply to save on plastic bottle waste. The results were posted within a couple of hours. It was truly a great effort on their part for a 1st tri =) 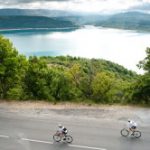 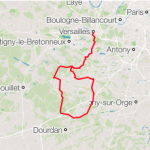