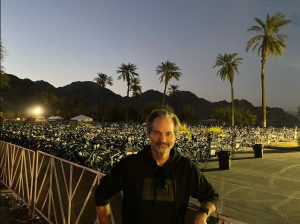 When my brother-in-law suggested that I join him for the Indian Wells Ironman 70.3, located in the heart of California’s Sonoran desert, I foolishly agreed.  The website promotes this event as “flat,” and having survived – just in October- the hurricane conditions and mountains of the Sardegna 70.3, I thought Indian Wells, with its lovely climate and lack of elevation, would be a walk in the park.  I was very wrong.  More on this later.

I flew with my bike from CDG to LA (11 hours).  When I was exiting the LA airport luggage area, I was stopped by a customs official who asked where I was coming from and how long I would be staying.  When I told him I arrived from Paris and I would be staying three days, he became suspicious and asked, “All of that luggage for three days!?” I proudly informed him that the large box contained a road bike and that I would be doing a Half-Ironman on Sunday.  “JUST a Half-Ironman? Not a real Ironman?!” he sneered condescendingly.  It is never a good idea to argue with customs officials, but I really didn’t like this guy……

My sister and brother-in-law were fortunately waiting for me in the airport lobby.  We then picked up my son at his university dorm (he’s a first year student in LA) and drove due east for three hours to Indian Wells.  We didn’t get to our Airbnb until midnight, so triathlon registration would have to wait until Saturday. 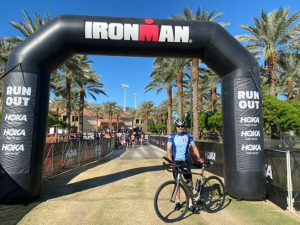 Registration and race transition logistics for Indian Wells are complicated.  The main registration area is in the Indian Wells Tennis Garden (known for the annual BNP pro tennis tournament).   This is also the location of the run transition (T2) and is about 20k from the bike transition (T1). T1 is located at Lake Cahuilla, where the swim would take place.  After registration, we were instructed to leave our running gear (in a designated “running gear” sack) in the T2 transition area.   We were also given a reserved time slot to report to the T1 area where we would need to: 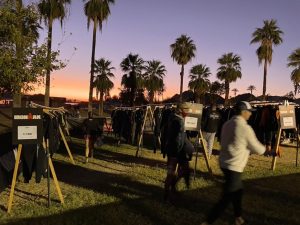 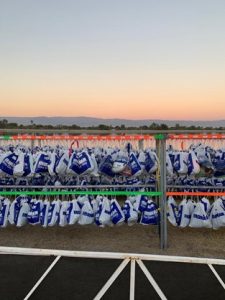 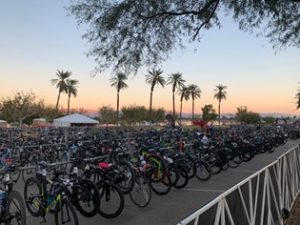 Cars are not allowed access to Lake Cahuilla, so we were required to take shuttle buses from the tennis garden.  The last bus departed at 5:45am.  As you can see from my “doudoun,” it was cold at that hour.

Queuing for the Shuttle Buses 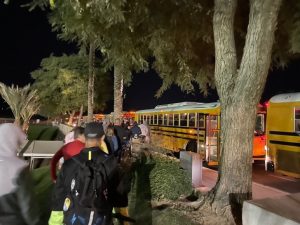 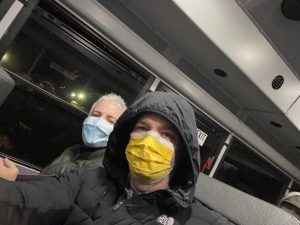 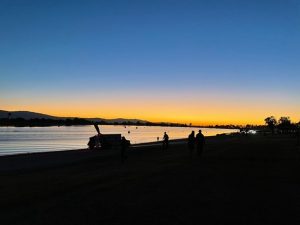 Lake Cahuilla is a prehistoric and protected lake set between a range of mountains and surrounded by palm trees. It reminded me a bit of Morocco when you are nearing the Atlas Mountain range.  The lake normally does not allow swimmers, so this event gave us a rare privilege.  Watching the sun rise over the lake was unforgettable.

My swim target was  <35 min, so I positioned myself in the back of the 30-35 minute wave.  Our start left at 7:10am, and wow…. entering the 14-degree water was a shock!  I don’t know if it was the cold water or the jetlag, but for the first 500 meters I really struggled to find a pace and breathing rhythm.  Fortunately, I managed to adjust.  It was one of the easier races to navigate as we did one loop of the lake, so you just had to make sure the shore was always on your left side.  Being able to fixate on the mountains also helped keep me in a (more or less) straight line.

This triathlon has a strange first transition.  You run from the swim into a cordoned area where you grab your “bike gear” bag.  You then have to carry the bag into a changing zone where you throw on your cycling wear and helmet, put the wetsuit into the “bike gear” bag, drop of the bag at a reception area, then run into the bike transition zone to recover your bike.  A lot to think about.

I felt great for the first hour on the bike.  The course is completely flat, and I was holding a fast pace (by my standards).  Was a bit weird at first seeing the distance markers in miles and not kilometers.  The morning temperature was perfect and not a cloud in the sky.  I didn’t realize (yet) that I was being significantly aided by a strong tailwind.

After about 40km of feeling good, we made a U-turn and returned in the direction we came. The ride then became a very different proposition.  I was now facing a brutal headwind.  The fun stopped.   This headwind would remain my enemy all the way to the bike finish.  At 60km my legs started complaining. but I did my best to hold on and stay down on my aerobars.

About 5k from the finish, the most bizarre thing happened.  A giant Harley-Davidson (a la “Easy Rider”) pulled up next to me, and a race official announced that I was receiving a penalty for drafting.  I had not done so intentionally, but it seems I was too close to the rider in front of me.  Just before the bike finish, I had to stop at the penalty tent and sit in the “box of shame” for five minutes in front of spectators and the passing cyclists!   I learned a good lesson.  *As a side note: The official monitoring the penalty box was a lovely guy from Quebec.   We had a fun chat in French, but I confess I had a hard time deciphering his “Quebecois.”

The penalty hurt and I dropped to 55th out of 86 for the bike segment.

It was sheer hell.

By the time the run started, the temperature had risen to 32+ degrees.  The first 1.5km was on a flat road and fairly harmless, but the course takes a sudden turn into a huge golf course.  Without warning, we turned into a steep uphill dirt path which led to 9km zig-zag course through the golf course.  The entire 9km is a relentless “Super Mario-like” uphill-downhill maze.  And we had to do this twice.  The heat was unbearable.  At every aid station, I would grab a cup of ice, pour half of the cubes down the front of my suit and half down the back.

I managed to make it running to the finish line but had a final colossal calf cramp 10 meters from the finish.  When I finally crossed the finish line they announced, “Congratulations to John from Carlton, Texas!” No idea how that happened…..  I’ve never lived in Texas and I registered as “French.”

Sadly, I couldn’t make up the time I lost on the bike and ended up 52nd out of 86.  Can’t say I’m satisfied with the result, but I’m inspired to get stronger for the next one!  And I managed to beat my brother-in-law by 2 seconds!

Thanks to everyone for your encouraging messages! Thanks to the coaches for helping me prepare!

A couple of after-thoughts: For anyone travelling to another hemisphere for a triathlon, I would recommend arriving a few days in advance.  I’m convinced that jetlag and lack of sleep were a big handicap.  I would also love to ask our coaches if there is a way we can prepare for hot conditions, while training in wintery Paris. 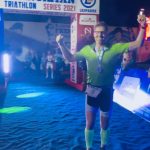