It is called Stupid Sunday, because, <for the uninitiated> getting up at 5am on a Sunday morning, to cycle 40-50km on the cold, dark and wet roads out of Paris, then run a Half Marathon competition, then get back on the bike and cycle home, might seem like madness. 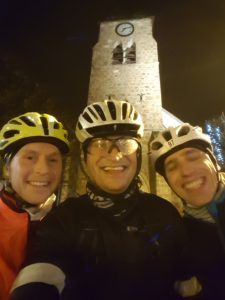 However to the Expatriés group, this is just a pleasant day out.

The team has been doing this for a number of years, so it was a pleasure to see 16 members up for the challenge, but disappointing to see a slew of last minute dropouts (some justifiable) but most simply due to a lack of foolhardiness.

However 3 men of so

und mind and body were up to the task, and at 6:30am Nick, Antoine and James found themselves hurtling down the pitch black motorway off-ramp down to Bievres in the pouring rain. No-one had much bothered with lights of course – sight is after all only 1 of the 5 senses.

Miraculously they survived and actually made good time, and as there was heavy cloud cover it meant that it was not too cold (no snow and ice as in previous years) however the rain kept coming down and all 3 were soaked through when they arrived at the sports hall. BUT as the team is known for attendance at this competition, the organisers greeted them with open arms and put all their wet clothes on the radiators – AWESOME. 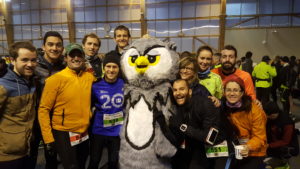 The lazy rest of the team eventually showed up, having illogically made their way down in that most pollutant of transport options – the car, and yet it was in high spirits that James, Antoine, Nick, Mareike, Côme, Miguel, Marianne, Luca, Nuria, Hilary, Patrick and Bruno all grouped around the organisations mascot (an Owl for some reason) for a pre-race photo.

First off were the marathonians, no-one in the team was mad enough to run that, however it became clear at this point that the real challenge of the day would be to get everyone together for a photo, as people clearly had different pre-race toilet strategies. Especially when you had to make the leg crossingly difficult choice between inside (warm) toilet with a long queue or the chilly outdoor dry toilets with a short queue.

The 10km runners just tried to hold on, but the semi-marathon runners were running out of time, and with mere minutes to go before the start, Luca and Hilary were forced to make the jump from the inside queue to the outside toilet line, which allowed them to get to the start line just in time.

The 10km runners were to start 30 mins later, so they had all the time they needed to refine their relief strategies, and then foolishly strolled to the line a little early, after the organiser announced that the start would be in a ‘gros 10 mins’ – which in fact meant 20mins ! – so they were standing out there in the cold shivering for 10 mins more than they needed to – at least by this time it had stopped raining, but the wind was something to be battled with.

When the gun sounded for the 10km, Côme shot off and never looked back to finish in 40mins, Miguel not far behind finishing in 42mins, then somewhat surprisingly Nick managed to struggle against the wind and finish in 44mins, then Mareike in 54mins (beating her own PB significantly) and finally Nuria in 1h03. 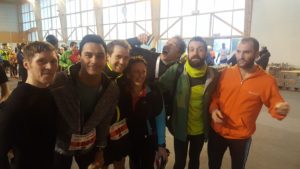 As they were all warming up and happy to be out of the wind, they watched Bruno finish the semi in 1h27, he had sprinted off from the start and never looked back, finishing 7th overall – slightly slower than he had hoped though, undoubtedly due to the strong winds. Antoine had started off fast, but by around the 10km point James and Luca had caught him up, as he was paying for his earlier race exuberance (and perhaps the cycle there) he managed to keep them in sight until the last 5km. Then in the last Km Luca found an extra gear from somewhere and left James in his wake to be the 2nd team member round, although one can’t help but feel that he had an advantage as he didn’t do the cycle down. After James and Antoine came Patrick who missed out on his own PB by  couple of minutes, but could barely walk when he made it back into the hall – Nick offered him a swig from his handy rum based hip flask, but Patrick misinterpreted the contents and practically drained it, which certainly would have warmed the insides, but would not help with his current walking disability. Hilary and Marianne made it in after him, both very happy to get out of that wind ! 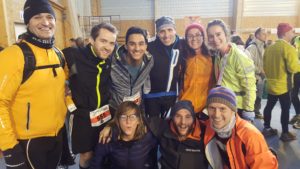 All in all a successful day out, the cycling boys had been smart enough to bring extra clothes, and the wet clothes were now dry, so the ride home was comfortable. They even made it past halfway backbefore being overtaken by the rest of the team in the car, so it seems that as well as being healthy and eco-friendly, cycling is also just as quick – why more people don’t do it I will never know 😉 Nx 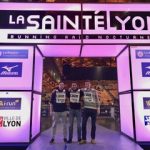 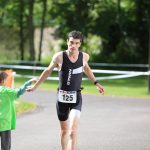