To complement Louise’s race report of the Mont Blanc sprint tri, Nora shares some of her learning moments from the race.

I thought i would note some of the problems that I encountered, because triathlons rarely go according to plan, and it is good if you know that up-front and learn to adapt. For example:

I am a fairly strong swimmer “in the pool”… but i am afraid of open water, not having a ground or edge to stand or hold onto if necessary. So, true to form, i tend to stand at the back and side of the wave. Due to the confusion Louise mentioned, I didn’t exactly position myself where I normally position myself. I started the swim, a few people kicked me, and I choked back some water, just enough to freak me out. So I stopped dead in the water, I thought i really wanted to get out and quit, realized, crap, I want to do the rest, spotted the boat, caught the eye of the boatman, who was concerned about me, I could see… then i continued on, after moving to the edge. Once I got going, i was better.

I lost at least a minute trying to get my wetsuit ankle over the chip strapped to my ankle — My wetsuit would not come over my ankle!! i laid in the bark/dirt and pulled and pulled. When i was done with many expletives, i looked like Pig Pen from Peanuts. Louise noted on my bike, “why is she so dirty?” LOL!

Lesson learned – next time i am putting the strap under my wetsuit. Louise and Sarah said they never sit on the ground. That is my goal.

I followed a cyclist around a circle and out, and turns out, he was just a rider! not part of the race. As i rounded the circle and out, i yelled at the Tri official in the middle directing us (by the way, she did NOT help or direct me!) if this is the right way, and luckily she spoke English and said NO!! so i had to turn around, losing a few minutes there.

Lesson: be careful of following riders who look like racers but who are NOT.

I showed up for the race, tried to read the website prior, gave up (my French is horrible), asked people what the route was, and tried to get confidence. That said, i did NOT have confidence in knowing the route. So as i am running one time around the lake (or jogging as Nick would say), i figured it was done, and thank god, as the run was painful for me. Sarah said I appeared to be in too hard a gear (low cadence) on the bike, and i agree with her. So i am in pain. All I can think of is THE FINISH. I see Nick rooting me on at THE FINISH, telling me to Destroy It, as he does. I figure I AM DONE. But instead, he said, “just one more lap!”…. oh no!!! I think, he can’t be serious?! So I had to somewhat quickly, regather myself. Again.

What fun and satisfying it is to finish with supportive teammates. Louise, Sarah and I formed a deeper bond doing this triathlon, (and with Julio who we traveled with and roomed, but he did a diff race), starting together, getting massages together, cheering our completion together, hiking the next day, and riding the train together. 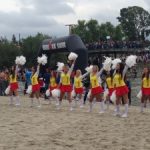