How fast can YOU change a tyre?

Much C02 was released into the atmosphere last Saturday, and this time it wasn’t from team members’ chatter!

What does ‘new style’ mean?

It means less talk, more hands-on. We’d noticed that some past attendees still couldn’t change a tyre, even though flats are all too often the reason for a DNF race result.

So we scrapped the PowerPoint presentation on components and bike fit, and saved the beers until later. Our ONE goal was for people to walk away from this workshop able to quickly fix a flat.

To be sure we threw in a competition at the end, ‘cuz we wouldn’t be triathletes if we didn’t like a bit of a contest, would we?

Things started off with Karsten and Roger going over the essential tools to carry with you on rides, and those for your home bike repair kit.

After a bit of question & answer, Karsten demo’ed changing a bike tyre, and then new member Rajah bravely volunteered to re-demo what he had done.

Nick also showed just how to use a CO2 canister to fill up your tyre in seconds flat (as long as you make sure to pierce it correctly, right Nick?) and to reassure everyone once & for all that it will NOT make yourtyre explode.

People then split into teams of 2 to practice on their own bikes, while the gurus and Nick circulated giving feedback.

Particular kudos go to the team of les Françaises, Rajah and Guillemette, for their diligence. They immediately dug in, managing to change tyres 3 times when the other teams had barely started their 2nd.

On your marks, get set, GO

After everyone had at least one try changing their rear wheel, Nick pulled out his stopwatches and Things Got Serious.

In heats of 2, competitors were to get on their bikes while the air was let out of their rear tyre. They would then be timed while they followed all the steps they had practiced.

Meanwhile, everyone else shouted advice whenever someone got stuck – just like onlookers at a race!

Here are the steps:

Once back in the saddle, the timer stopped.

And the winner is…..

Proving that practice pays off, César–who has been dealing with flats on a weekly basis on both his bikes for a while now–won by a very comfortable margin with a time of 3 minutes, 58 seconds. 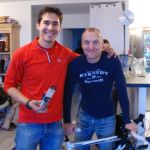 Final results for everyone else:

(It must be noted that Karen & Phil gamely volunteered to be in the first heat, so did not get to review the steps by watch others compete first)

Afterwards, buoyed by their newfound mechanical prowess & beer, a few folks tried on some sample jerseys & shorts to figure out their size for this year’s team kit.

Amazingly, after 4 hours of having their living area invaded by triathletes, tools, gurus, tubes, canisters, and most of all, bikes, Juliette and Circé were still all smiles at the end. Thanks for letting us invade! 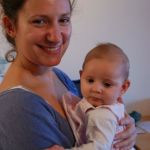 Well done everyone – with all this practice tyre changing, you’ll have the competitive edge at your next race (or next training ride, for that matter)! 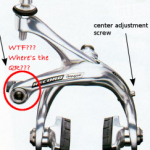 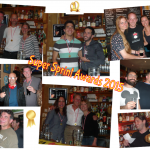