Marie & Romain, Aurelie, Alex, Sarah &  Karsten, Ed, Philippe, Julio & Birgit, Ionut and Bertrand spent the weekend of July 19th 2015 having a nice touristic and gastronomic getaway in Hamburg. Although we were spread out between apartments and hotels, we managed to visit several restaurants together to taste delicious German cuisine & the occasional Weissenbier (wheat beer).

Oh yeah, and Marie, Aurélie, Alex, Ed, Philippe, Ionut, Bertrand and Julio also happened to have a little team workout on Sunday morning (Sarah, re-injured, was sad not to be able to join). That’ll be covered in Part II.

Friday evening, after a short flight, the group went out for beers in downtown Hamburg. We made plans to get Philippe to bring us morning breakfast, while Ed was trying to professionalize our “English speaking” with the right usage and timing of “Are you coming?”.

Don’t ask us more, it seems we have not passed level 1 nor reached 1st base yet.

We started with a great breakfast provided by our sponsor, Stadnik Boulangerie. After breakfast we picked up our dossards and rental bikes, then had a look around the city. Some decided to go skinny dipping in the lake, as Ionut had advised us the night before that his sauna was “no textile” and mixed. 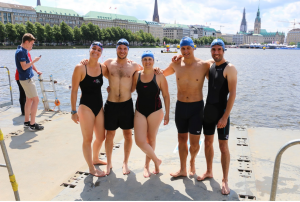 Then we all went to eat potatoes in good German fashion. 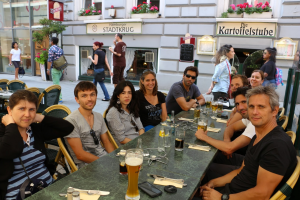 In the afternoon, we went on a long boat ride  to tour one of Europe’s biggest commercial ports. We saw some really impressive boats and the biggest Minions advertisement in the world. We also learned that The Lion King is still alive and kicking in Hamburg after 14 years.

That evening, after the strenuous boat cruise, we needed to replenish our energy. 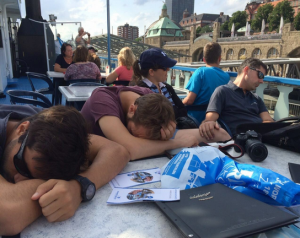 We chose a nice Italian restaurant, Rocco’s, where we also enjoyed an elegant Italian red wine. The food took a while to arrive. In fact it took so long that we started banging on the tables to attract some attention. For some this brought back memories of Spring Break, but alas we can say no more, as the saying goes “What happens in Hamburg, stays in Hamburg”. 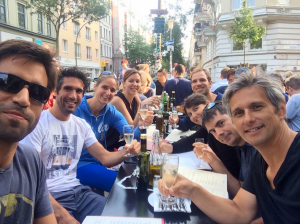 Not much to say about the rest of the weekend either, EXCEPT maybe that there was also a small sportive event that we last minute decided to participate in. It was apparently called a triathlon, which involves a short leisure swim, a quick spin in the bike and a light jog to lift our spirits & become Olympians (so nice to have another Greek event in Germany). 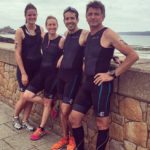 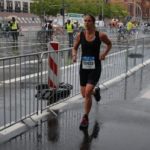