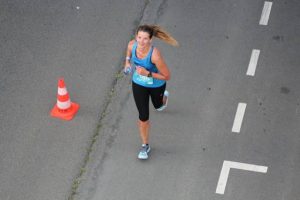 Having sustained three running injuries earlier on in the season, Tours was somewhat of a last-minute choice. A last race before my summer break from structured training. It is close to Paris and its scenic bike course was rather appealing.

The actual race venue is on the outskirts of Tours, between an Ikea depot and a stadium and the “village” contained numerous highly unsuitable food stands as far as athletes are concerned: Burgers, Beer, fried stuff etc. However, one should not be put off, as this is a smoothly-run well-organized race well worth doing. It is what I call an “easy race” and by that I do not mean walk-in-the-park easy. I just mean fast and flat. It reminded me of Challenge Roth: A flat, fast bike course on excellent roads and a flat run along a waterway with a few ramps thrown in as a memento mori.

On race day the weather gods smiled upon us, providing us with a sunny, warm day with little or no wind. My personal experience started with an uneventful swim in the river Cher, where the water was warm and very slow. Personally I am not a fan of these new rolling starts. The touchy-feely, full contact free-for-all combat of a mass swim start is an integral part of the triathlon experience. Or maybe not.

T1 is over 1 Km long and we were allowed/advised to have a second pair of shoes to get to our bikes. I am very glad I followed this advice given the surface and lack of carpeting.

Once on the bike we were quickly into the countryside, leaving behind the gaudy blue and yellow of Ikea. Very pleasant bucolic views were interrupted from time to time by wow-moments like when we took a sharp left onto a bridge and were presented with a stunning view of the chateau of Rigny-Ussé. Aid stations were well placed (except one when we had to stop in order to get anything) and invariably well run. This bike leg flew by and it is one of the ones I have enjoyed most.

Now onto the run, which is normally my via crucis. My coach had given me no targets as I have not been able to train regularly or well (“see how you feel and if you can take it up with 5km to go”). Being my last race before the summer I decided to go for broke and tried to keep power at around 240W, which turned out to be manageable. The actual course is flat (have I said it before?) with a couple or staircases and a narrow off-road stretch which nevertheless did not cause a bottleneck as everyone behaved in a very considerate fashion, letting through faster runners. The funniest moment was when I approached the far end of the course and I heard an increasingly loud creaking/tweeting sound which I assumed was coming from some over-active supporters. In actual fact the noise came from a suspended pedestrian bridge which was resonating and complaining, being unused to having all those runners galumphing over it. A very unnerving experience.

With 5Km to go I tried to pick up the pace but not much happened. I therefore reserved my last few ounces of energy for the last 3Km, which took me to the noisy finish, inside a large exhibition hall.

Very satisfied with my result I collected my medal, finisher cap and tucked into an excellent selection of food served with a glass of beer (Not alcohol-free! One up on Roth!).

Bag and bike collection were very easy and well run by the many smiling bénévoles who were one of the many good memories I will take away from this race.

Before returning to Paris I tried to catch a glimpse of Apolline, for whom there are no half measures and who was competing in the Iron-distance event. I managed to catch sight of her, smiling and amazingly fleet-footed while heading into her third lap of the run.

Here is her race report: a tale of a very gutsy. first iron-distance performance:

Here is a small race report of my first ever ironman distance triathlon. I’ll leave out the months of hard training and the intense stress I had during weeks before the race.

I arrived at a friend’s house on Friday night (nice swimming pool and right next to Chenonceau castle). We went for a cool 30’ run and 1h bike on Saturday morning and then got to Tour to pick up my race pack and drop my bags and bike at the transition area. It was quite an exhausting day and I had no problem falling asleep on Saturday night. I woke up at 4.30, my friend drove me to Tours and I got to the start area around 6.30, half an hour before the beginning of the race. I was so stressed and I could not really eat anything. 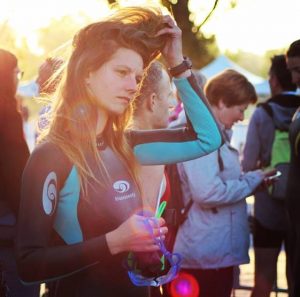 The swim went well: the water was not cold at all, around 20°. I really enjoyed the rolling start as I did not get overwhelmed and kicked. It was really smooth and easy swim. I managed to go out in 1h15 min for 3800m (two laps, no exit).

The first transition was long, as you had to get your transition bag, then get changed and the bike area was almost 1km from there.

The start of the bike went well, not too many cramps as I managed to keep my legs still during the swim. We had some headwind but I knew we would have it on our back at some point. The landscapes were really nice (lots of beautiful villages and some castles) and the road was almost flat. 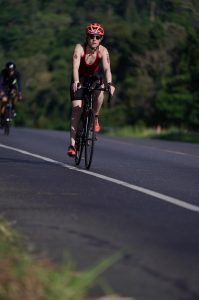 But I crashed on km 55 : down a hill, a very tiny turn and I thought we had the whole road to turn and not only the right side. I couldn’t avoid the car that was coming. I ended with a lot of scratches and some pain in my shoulder and tailbone. But I couldn’t give up so I went back on the bike and finished the first loop (90km). And because of the open sore on my forearm, I couldn’t rest on my aerobars anymore J. The second loop was much harder, as there were not so many racers left with me and I started to feel very tired. I finished in 6h29 with very sore legs. I’m happy with my 28km/h average, and I know I still have a lot of work to do on the bike to improve.

As I started the marathon, I felt really great. The two first loops were easy, even if the weather was very hot. I finished the half in 2h03. Then, things got complicated. The third loop was terrible mentally and I had to slow down a little. During the fourth one I had a lot of nausea and I had to stop three times to get better. Luckily, my legs were tired but not in pain at all. But in the end, I’m very happy with the time: 4h24.

Overall: 12h34 for my first IM, 11th woman and 3rd in my category (SF2). It took me a lot of hard training to get there but it was totally worth it. I couldn’t have done it without the club, the coaches and the friends I made there. Today is the day after, my legs are doing well, but the injuries from the bike accident are very painful.

I would just like to underline the amazing organization of this race, everything went perfectly well – and the tonnes of cheering I got from the volunteers and the public.

Violaine fights the heat in the Philippines to qualify for the World Championships in Nice2019, June, race reports 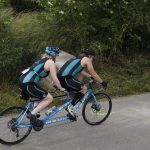