Last year, the first year that this event was held, there were 104 competitors and 4 from Expatriés. This year there were 170 entries with 12 from Expatriés!  Next year we should aim to be the biggest club there!
After a beautifully sunny Paris Bike and Run on road bikes and smooth tarmac this promised to offer exactly the opposite. It was damp and wet all week which meant that the course (3x 5km) around the forest of Mesnil-le-Roi on mountain bikes was potentially going to be a another mudfest like 2013.
Logistically everything went smoothly and we all met at chez Betts who live just a few minutes walk from the start of the course. We were all pre-registered thanks to Nick and the bike we ‘borrowed’ off the race organisers, Houilles Triathlon Club, was ready and waiting. 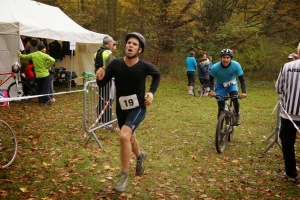 The start this was a bit different than last year. The bikers were kept near the start and the runners then did a 600m twisty-turny loop in the forest before doing the first obligatory transition and then it was off into the forest proper. There was certainly mud on the course but it was easy to cycle/run round the worst parts so there was no getting bogged down on the bikes.  Whereas the Paris race was running hard and getting a rest on the bike last yrs event was a case of cycling hard thru’ mud and then ‘resting’ on the run. Luckily this year it was dry enough to enable us to run hard and rest on the bike. The main rule during the race was that you must stick with your race partner and there were two ‘controles’ in the forest where you had to make sure that you were still together. 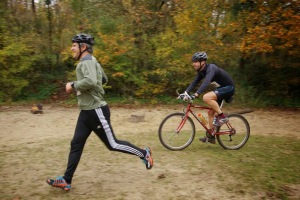 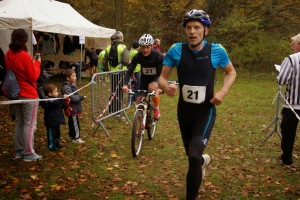 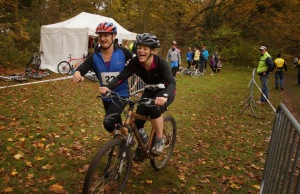 Looking at the official photos you can tell everyone was having to work pretty hard to maintain the initial pace and, as Roberto said, in his post race MeetUp comment « Good fun. Worst part: the end of the first lap (golly! 2 more to go!!) » which summed it up nicely. 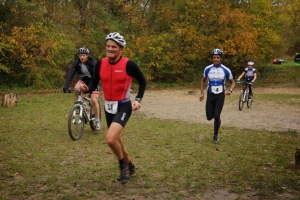 The « young ‘uns » Philippe and César finished in just under an hour with a gaggle of Vets ( Paul B & Brian, Roberto & Adrian, Sean & Ed) all coming in just over the hour mark with some close quarter battles between the first two pairs. Good work from Paul W & Karen in the mixed teams with Wippy & Marie earning themselves a senior ladies podium p 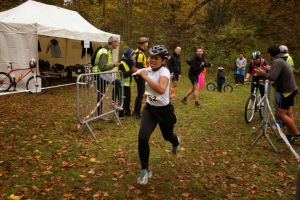 lace and hats off to them for doing it on a town bike rather than a mountain bike.
Was back to chez Betts after for teas, coffees and beers with excellent Brownies being supplied by Karen.
Roberto & Adrian were just 16 seconds behind Paul & Brian and when we were changing at Paul’s house Roberto noticed that he had his left sock on his right foot and right sock on his left foot. I reckon that ‘schoolboy’ error may have cost his team 17 seconds… !

Overall a great ‘local’ event,  no stress and lots of fun. 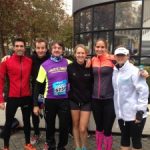 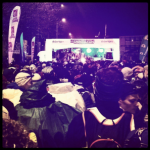