Alexandra returned to where she did her 1st triathlon, Ironman Dubaï 70.3 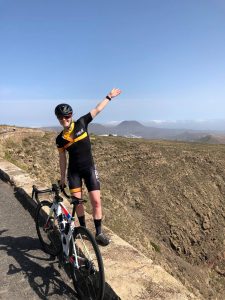 Ironman Dubaï 70.3 … my first ever triathlon in 2016 after less than 8 weeks preparation time with no experience in this sport (fully beginner in the swim and bike) …. despite this tremendous day of 6h30 with a shorten swim by 2/3 due to extreme windy condition, I have been ever since hooked by this sport ! 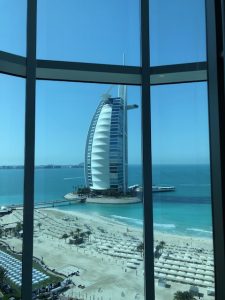 I have been trying to sign up every year since then as a set up point of fitness comparaison every year but beyond my will….come injuries … and I have been facing a lot of injuries since I started triathlon … mainly because I don’t have this ability to recover well from each training … I am an enthusiastic amateur and as as passionate in the work as in life , and as in triathlon …. it means a speed of life with few time to do nothing and rest and this increase exposure to injuries ….

Back to Dubai race history and facts :

-2017 was a fight to gain on my back mobility with an objective to get prepared to finish my first Ironman in Nice ,I had to skip Dubai

-2018, I maintained my participation by deciding to race at last minute despite a TFL/knees syndrome . I had a very encouraging result mostly on the swim and on a bike which was not mine … and a hour gained compared to 2016 … i became a better athlete and the performance would not have been so great without the big and beneficial change in my coaching ….

-2019, I had to withdraw my participation due to my groins tendinis as a result of too much stress post racing (hard and great) with a new demanding work … all in all 2019 was a total disaster for me and ended up refocusing my year on short distance to maintain fitness

-2020…. same triathlon coach but we (I and my coach) decided that it was important that I found a closer swim group and I got the chance to join the Swim Club of Puteaux . How fortunate I am to train with those people preparing national and international pool race with brillant coaches ! I think I have been progressing a lot. I took part of my first races as a swimmer on 100 and 400 freestyle…but then came another injury again ( a récidive of my postibial tendinis and foot fascia contracted since last April 2019) This interrupted the run preparation for almost 1,5 months …. but instead of giving up.. found an alternative to maintain the cardio with elliptical inspired by pro long distance triathlete Romain Guillaume when he was injured last year. This technic was confirmed by Ludo from the club ….this was followed by somehow very long rides with the ultra riders during Xmas to build on endurance thanks to Rapha 500 challenge that ended up with 800 km in less than 5 days . I was also very fortunate to have the best kine center that always put my issues a priority ….

1st of Jan 2020, and I have had the go to start running again , I realised I had a bit less than 5 weeks to make specific training to Half Ironman pace …. the coach made my training focus and super rational . I isolated a bit myself for some solo headwind training but I was fortunate to have my happy crew to support me and joined me from time to time on some rides but they were very understandable to let me do my specific pacing block I had to do. Run went back slowly , I had my target race time in mind …. but I was not running enough and as fast as I wanted but that’s was the way it was … a pact between my coach and the kine, I should follow a progression and validate each step if I wanted to remain injury free (or almost) …. some days before the races I validated good pace on the swim , solo bike and even on the run … was of a good odd this time … the (or almost) best preparation I ever done even if it was too short to validate longer run beyond 14 km …. 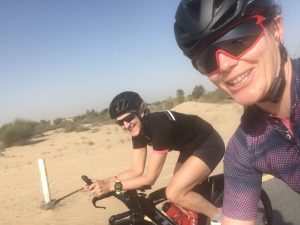 Training done and healthy – 1/3 of the race done . Now taper days …. fortunate not being overload at work … going to Dubai 3 days before the race 😱😱😱, I was joined by Cat Thomas with who I shared most of my time of the pre race at her hotel nearby the event . We shared some of our last shake out training … we went to Al Qudra cycling track in the desert to activate our legs and make the check up of our respective machine … all ok , been doing a small run along the sea side of Jumeirah and test the choppy sea and ended up swimming next to the lane of Helen Jenkins , pro Athlete … felt like all the progress on the swim disappeared 😕 but never mind … everybody race is different …

Arrived at T1 to check and prepare the bags , I met Lucie , Catherine and other friends from a bit of everywhere with whom I will discuss until the warmup …. 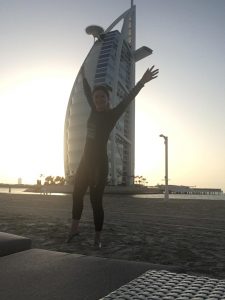 we all had to exit the water to join the start line , more focus than ever , I start to ask the rolling for 30-32’ swim which was my target … a bit of a mess … mix people some 28, some 32 , some 36… we regrouped … at the end I started 1 ´ after the AG gun start … running to jump into the deep water of Iranian sea and from that Moment , I will always remember what my swim coach told me one day I was desperate with my pace during a training :be confident trust yourself …. this sentence never faded away until the finish line …I swam , I was gently getting passed over – probably I was with sub 30’ swimmers … I never fought to catch their feet … since I had a very good feeling of glidding …. this was my day , I trusted myself …. still 200 m until the arch to end up the swim …. In my mind I swam my day, this was a Swim PR and in the target … out of the water I looked for the first time at my watch …. what 36’ ….. where did I fail ????? (Later the watch told me I decreased significantly my speed in the middle of the 1000) …

In another context , I would have lost my focus and would have moaned against myself in transition and about to say it not worth to pursue (yes I can have this negative mindset sometime), instead i always had a positive mind … it was a lovely and sunny day …. and most importantly i had to expedite this transition … means no sun cream (put enough at 4 am) , no picnic in T1 as I am usually used to do on the top of moaning ! So I took my little weapon hoping no flat would occur …. T1 on track …. I jumped on the saddle , some technical turns to head to this straight line into the desert and 💥 a little of headwind … this will not kill me … Jeanne (my cyclist buddy) has learnt me over the last months to love the wind …so my target was 34.8 km/h average over 90 k to stick with the target, but I Was already late and needed to push more but probably not reasonable at all to have a discent run …. first 45 km I maintained approx 34 average , some packs passed me and I let them go… very tempting to be in a pack to explose the PR and get fresh legs for the run … but this temptation never crossed my mind …and I was also happy to see referees to distribute cards… (totally different from Les Sables where referees where powerless), after 45 km, the turn and cross wind helping slightly but not as easier as a tail wind could help … The power meter indicated less watts … ideal to rest a bit but my legs were already cuicuite …. ending up with a pace of 35 km/h + average with 500 d+ in 2h33 …

now T2 …. saw many prisoners in the penalties box resting …

so I had to run now … the legs were tight … extremely tight but I have seen worst days … I was not on track from the beginning , I believe the target speed could come after 1 to 3 k… but got worst …. I could see the pro focus in the hard but at an incredible pace aka Imogen Simmond, 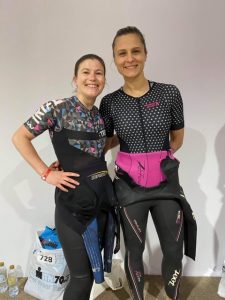 My friend Lucie passed me, she had a good stride and was in great shape /she invited me to follow her but I was in the hard, my heart rate was at its limit … if I had to follow I would collapse at some point…. arrived at k14… my thought : it s been 1,5 year I have never been that long …. I will explode …. I saw Maria my best friend and his kids … the 4 year old son said to his mum, look she is incredible she run faster than the guys … never mind … I started to become this machine and disconnect this brain to forget the muscular pain and psychology …. I wanted to cry but I remembered it was a good day … finally I do a negative splits on the second part . I finished a bit above my target in 5h16 which is still a PR and mostly a massive PR gained on the bike by 16’ …. 2,5/3 of the job checked …. 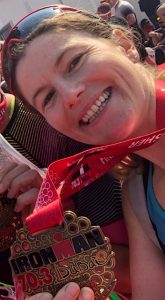 At arrival I met all my friends to celebrate the finish … a queue started to form to redeem the chrono clocked since it appeared some bug timing issues … I effectively look at IM tracker with surprising time for everybody . The chip did not work for the swim for 3/4 of the participants . This got rectified but the race has been split between a duathlon for 3/4 and a triathlon for the other 1/4….

the award ceremonies was canceled for AG which is the bitter side of this event and after some weeks to analyse results award and slot allocation was made on the phone by Ironman who called each incumbents to the worlds championship for slots. I was finally being called for Taupo 70.3 Worlds after some days of waiting. This qualification was not an ultimate objective but an opportunity much more appealing than 2019 world in Nice just for the simple reason to discover a new country and breathtaking place to mix my passion of racing and holidays! All in all, I am very proud of this achievement that could not have came true without being with the best sparing partners over the last months on the swim and bike (you’ll recognize yourself), my triathlon and swim coaches but also the kines. Being with the right people is important …. 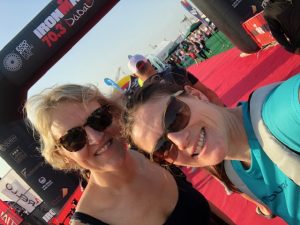 I now still have to work on my objective this year if Covid-19 allow the race scheduled in May otherwise it will need patience . 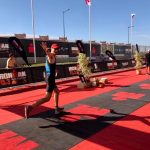 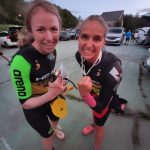 Racing is back as Anaïs & Aurélie take on Grenoble SwimrunMan!2020, August, race reports