First club ride – How did it go?

The day started perfectly  – chilly but sunny – as we gathered at the Starbucks across from the Versailles RER station.

Initially planned for 8, due to demand (at one point there were 10 on the waitlist) we upped the limit to 10.

There was a wide mix of riders: Mark V, David L, myself (as ride lead), Marie, Laura, Rajah, Dani (ride lieutenant), Peter (ex of Poissy tri club) and Matthieu. Duncan was supposed to come but had a flat on the way over, and no spares.

Even though he was still on the waiting list, I invited new member Luis because I knew he had lots of paceline experience. Bonus: he also could fix the one minor mechanical (Peter’s derailleur) we had that morning.

We did a 73km loop south of Versailles on Sunday, ending at St Remy les Chevreuse. Mark, Peter and Luis opted to Dampierre to continue riding back to Versailles via the 17 tournants route.

Why are we doing these?

The idea of Club rides came up shortly after the Versailles sprint. Peleton riding is some of the most fun I’ve ever had on the bike, but I was also got the impression the ladies in yellow & black (EPPG) were the only ones who knew what this working together business was about.

The results bore out my hunch. 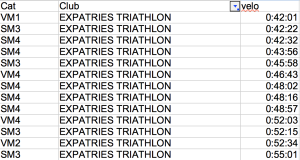 Or course, our team won the picnic discipline hands down, and I’m sure we’re better looking too ;). Nonetheless I distinctly remember thinking how cool it would be if we were able to form an “Expatries train” in draft-legal races, especially since there’s so many of us.

But this requires us to ride as group more often. And to learn a few bike handling and group riding skills, so big rides go more smoothly.

So how was it?

To break from the status quo, Sunday’s ride felt a bit like bootcamp. It was like an accelerated version of Fieldmarshall Paul’s 7 Weeks to Better Cycle from 2013 (notice that several attendees are now the people who win Expatries Challenge awards, regularly get AG podiums, and/or finish first on the team at events).

It took a bit of shouting at people to close the gap, keep pedaling, and to communicate through the line, but around the 40 km point, where the roads were emptier and flatter, we turned into something akin to a well-oiled machine.

We were predictable, riding in a straight line, silently signaling turns, swerves, obstacles, or cars behind. We also had only one car-honking incident, at a particularly awkward intersection before St Remy where we were had to wait for stragglers after a long descent.  This is a big improvement over my previous group riding experiences.

People were alternating riding up front and then peeling smoothly off – although this still required prompting at times, especially when riding in pairs when people would chat and lose track of time.

This particular ride was not about speed, it was about learning to keep together & rotate through the line. But since the purpose of drafting is ultimately to ride faster using less energy, near the end of our ride we did try up the speed towards Cernay la Ville & coffee.

And the boys discovered that next door to the cafe in Cernay la Ville is a patissier whose macarons placed 3rd best in the Championnat de France du macaron!

There’s a long waitlist, why not offer more of these Club rides? Or have bigger groups?

Groups bigger than 10 will stop being enjoyable for the riders & ride lead alike.

Among many other things, a 10 person ride will always take longer than a  3-person ride: more people will need a pee break, a coffee, or will have a mechanical. Plus, there’s some instruction & feedback being given here, which also takes more time.

Multiple pace groups would be nice, but probably not for right away. I’ll be happy if have one ride every Sunday. If you have group riding experience & can navigate, or simply want to be a “ride lieutenant”, give us a holler. 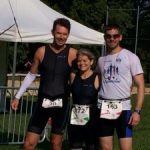