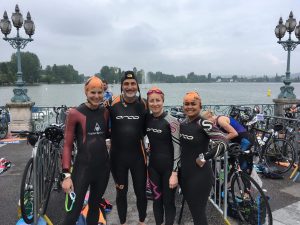 I decided to sign up for the Enghien Triathlon mainly because of convenience. It’s close to Paris and I wanted to do a few M Triathlons before the Ironman 70.3 in Vichy. I came by car since I’m living a bit outside of Paris but others came by RER, which was pretty convenient as well. One advice, in case you want to come by car, be there early since it’s very crowded. I arrived at 11am, about two hours ahead of the race, and could park at the official parking lot without problems.
Philippe had already picked up my dossard on Saturday, so I had plenty of time to explore Enghiens (not that much too explore) and to look at the muddy water of the lake. Dossard pick-up seemed quite ok also on Sunday, as long as you avoid getting there half an hour before the race starts. 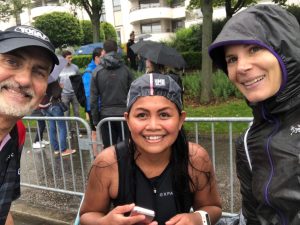 The swim
After a quick photo we went into the lake. The men started 2 min ahead of the women, which resulted in a quite relaxed start since there were only few women. After reading last years race report, I wasn’t looking too much forward to the swim, but in the end it was rather good. The water is very muddy, and you don’t see anything (literally). It didn’t really bother me, but you should avoid drinking the water. It was not too crowded, and most of the time I could swim rather undisturbed. After one big loop of the lake, the swim was already done and I hopped on my bike.
The bike
I had also been a bit concerned about the bike since it involves a quite steep hill that has to be repeated three times and I had been warned that the road might be slippery and dangerous. Maybe it was because I had low expectations, but I really enjoyed the bike course. The first 8km are flat then you have to do three loops, which include an uphill ride of about 1.5km with 100m elevation gain. Keep in mind when going uphill, that you have to do it three times! After the hill, the rest of the loop is very easy and mainly donwhill. There are a few sharp turnarounds, but otherwise there are many long lines and you can go rather fast. On the third loop it started pouring, not much fun on the bike and I had to slow down a bit since there was water coming from every direction. Luckily it stopped towards the end of the bike course and I could even dry a bit before starting running.
The run
The run is two loops along the lake with a U-turn at the end. It’s nice and flat and allows you to see your teammates. About every 2 km there was a ravitaillement (water and coke). I didn’t need much water since it was rather cool outside with occasionally a few drops of rain.
I regretted not having taken another pair of socks with me since after the bike my feet were cold and wet and it took me about 30 min into the run to feel my feet again. During the run I could also feel that my legs had done some work on the bike, and I was rather happy to see the finish line. Unfortunately, it’s were I discovered that you had to another 300m before doing a U-turn and then it was finally the finish line.
Summary
To sum up, I really enjoyed the race and would recommend it without hesitation. It’s a triathlon at a very fair price, very well organised and with many friendly volunteers. If you like challenging you a bit on the bike, and you don’t mind a muddy lake it’s a good option for an M Triathlon close to Paris. Compared to the Paris Triathlon it’s a different crowd doing at Enghien. Most people competing at Enghien are a member of a club and have been doing the sport for quite some time. In consequence, it’s a rather fast race and it can be a bit lonely if you are towards the end of the race. In any case, I plan to do it again next year.
The rain doesn’t bother Charlotte at Enghien Val d’Oise2019-05-282019-05-28http://expatries-triathlon.com/wp-content/uploads/2017/10/expatries_logo-sansfond-e1509014842840.pngInternational Triathlon Club of Parishttp://expatries-triathlon.com/wp-content/uploads/2019/05/two.jpg200px200px 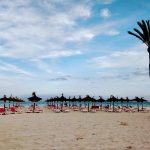 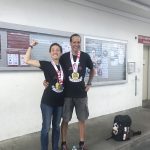