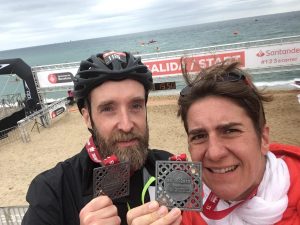 What best for the closure of your first triathlon season? A PB in Barcelona! 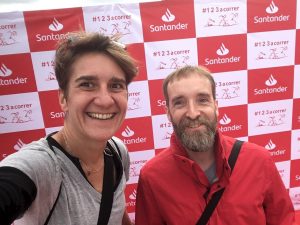 What a year! What was supposed to be initially a stupid challenge turned into an incredible adventure. 9 months back in December, while looking for a club in order not to be ridiculous on a triathlon, result of a dare competition with my former co-workers, I’ve joined the Expatries. That was the start of multiple tortures looking for abs during Kathryn’s core HIIT session. And running, on the track after the timer and seeing the tee-shirt of finisher moving away, in the darkness and the cold winter of Bois de Boulogne without a front light, in the mountain after skiing just for not losing the pace. As it was not enough it was also intense swimming in the pools or lakes, crawling in muddy swamp, diving in castle’s pond, drowning in Paris’ channels.

All of that wouldn’t have been possible without the support of the Expatries family. There was always one of them around for pushing, if not pulling, me to the finish line. Well and to the start line too actually! That’s actually how I ended up in Barcelona. After Paris triathlon and a poor performance, I was hesitating for a new try as final stage of 2019 season. The races were getting sparse on the agenda in France were quite interesting. With an extra motivation from my club mates, I registered to “El mas grande”, the Barcelona triathlon.

Packing the bike and jumping in a train, the first stop was for Perpignan back country. How incredible it was to get back there with a friend I haven’t seen for maybe the last 15 years, and that I’ve met up at the 80s supersprint 2 weeks before! Between “aperos”, we planned some warm-up, running in the vineyards and experimenting sea swimming in salty Mediterranean. Almost ready, we managed the Tetris game to put our luggage and bikes in a tiny Suzuki SUV. Fear Barcelona, we’re on the road. 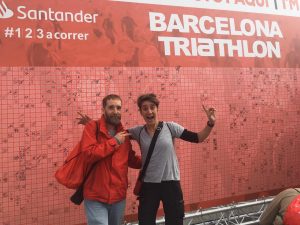 Without time for a visit, we got ready for the race, trisuits on and flexing like compulsive worm to fit in the wet suits. Definitively it’s your body that fits to it, not the opposite way… Unfortunately we were in separated waves but the motivation and the ambiance were at their maximum. Luckily the weather was shiny with light clouds. On the horn, I dove in the deep blue! Crystal clear water and nice temperature, ideal for a morning bath, but being in a later wave I got a bit lost due to the wind. I was surfing up and down for the next buoy. As I’m not able to breathe on right side, I can confirm on the salty taste of the water and I was ful of natural electrolytes!

No time for a tea break, I ran out of the beach. Hopefully the wet suit didn’t convert in a straight jacket and I could jump on the bike and pedal above the speed limit. The route was flat with some relaunching after U-turn. The average speed could high except on the sea front where the facing wind was offering some resistance. Unfortunately, I didn’t find any group to follow to benefit from drafting. On the last loop of this 10km route, I footed off to keep some energy for the final run. 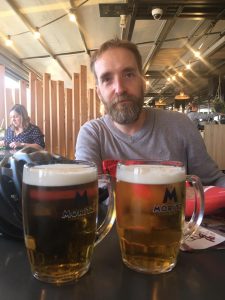 Back to the transition area, the running part was going well with a good pace until the sixth kilometre. Unfortunately, the “ravito” didn’t provide any solid food, just water and energy drinks, and my own reserves were empty. I started to feel being out of fuel and finished the last kilometres in a mix of walk and run, pushed by the public and the other runners on the tone of “Venga ! Venga!”. Despite a run above 1h the overall race completed in less than 3h! I was far from considering this as achievable 9 months earlier. My friend did a bit more than 3h15 for her first Olympic too. We were both delighted about our results and celebrated our personal victories around a pint of beers and tapas. While packing everything back in our ultra compact car, I was already dreaming of next year Barcelona race! And maybe some others of the “Catalunya league”…

It was truly my best experience on a triathlon so far, with an exceptional organisation, but more important competing with friends and being supported from distance by all our cub mates. 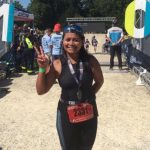 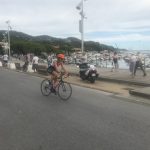