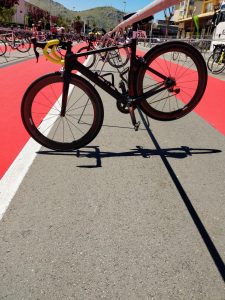 For my first race of the season I was in Mallorca for its annual 70.3 Ironman. As I am training to do in six weeks the full Ironman in Nice I had to test my legs with a race to make sure my training was going well.

I am following a full distance Ironman program started by mid January. The training program is a lot of Z2/endurance workouts which goes from 12h to 17h a week over the six months of the training.

By mid Feb I had an unfortunate knee injury while travelling due of not following properly my training plan, since I was not able to bike and swim I ran instead every day and catched the infamous “runners knee”. Obviously that was a mistake.

I stopped running for a few weeks and then when the knee started to feel better, I only did some reduced and slower long runs and skipped the intervals or tempo workouts.

Most of my cycling in winter was done on Zwift following the training program. When the weather was getting too cold or rainy I did some of my long endurance ride (over 4h) on the HT as well, no matter what entertainment you set-up be it movies/zwift rides/podcasts etc.. going over 3h on HT can get mentally very challenging!!!! It’s a long slow burn of boreness in a mental void .

I hate Swimming I really do and I still think I am not genetically made for swimming, but this year instead of focusing on distance, I stopped using my garmin watch in the pool and focused on the time spend there doing drills and quality workouts. I had two weeks courses at my local swimming pool, this was a beginner and intermediate course but since we were just only 3 people it was mostly a group of beginners (and me a beginner that still can swim 4k in an IM very slowly). We had a 50m swimming pool for ourselves and a bunch of exercises to do. Which did help a lot to at least start enjoying going for swims, 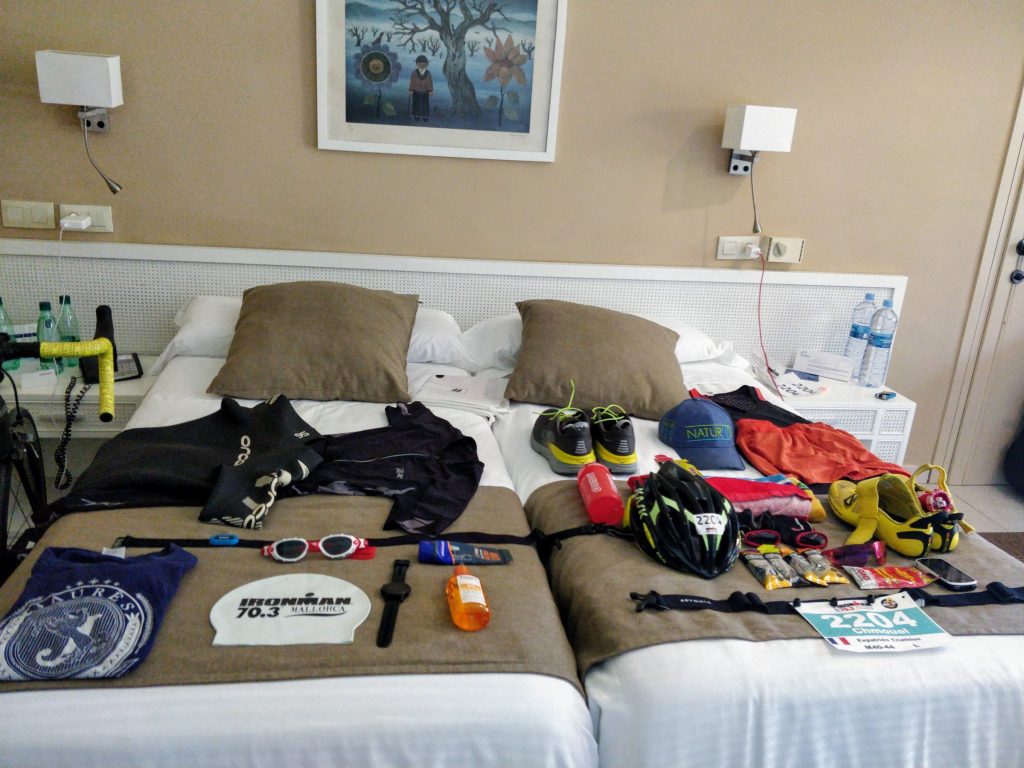 I already been to mallorca a few times before and I arrived a week before the race joined by some of my triathlon club team mates. We stayed at the PortBlue Club Pollentia ressort which has everything ready for triathletes. Two 25m swimming pool one indoor and one outdoor for swimming, multiple bike shops, gym, spa etc…

Just when I arrived, I did a very slow 45mn “shakeout run” near where the race start in alcudia to make sure knee was all okay.

The day after I did a reckon of the bike race, I knew mallorca pretty well from staying here a few times but not the exact routes. I followed my watt and stayed very easy for most of it, I did it in 3h40 and I was confident I can do sub3 on race day.

For most of the rest days I was swimming, spining the bike easy or going to the gym and tanning session under the mallorca sunshine getting ready for the big day.

One thing that was really convenient at the resort is the availability of a bike shop and they were doing check/up and bike cleanup for only 15€. You can’t go wrong in a race when your bike is all shiny.

Even tho there is an enormous buffet every day at the hotel, I kept it pretty healthy carbs, proteins, vegetable etc… Just two days before the race, I carb loaded a bit more but made sure to don’t get ‘bloated’.

I never sleep so well before a race the night before but this time I had almost 8h of quality sleep and waked up just 45mn before the bus was picking us up to the start of the race.

By experience before an half ironman I don’t usually eat a large breakfast because my tummy don’t like it that much. So just a coffee and some muesli and I was ready to go.

I picked up the white cap for my race start, which mean going to the 35/40′ wave. My best swim time on half ironman is around 43′ so that may not have been the right wave but since it was a swim in the salty Mediterranean sea I have expected to go faster in there. And my time lately did improve in the swimming pool so I guess there was hope for a sub 40′

While waiting on the beach for my wave to start, I was just keeping hydrated while chatting with some of my team mates, not stressed much about the start.

When I finally was on my starting wave I ran over the beach to the water and starting to swim felt good. The first few hundred meters went quite fast, I made sure to stay in the pack with people and kept it straight until the turnarounds.

By the time I was out of water, I could see 40′ on my watch which I guess I was happy with. I usually come out of the water when there is not many bike racked left and usually I end up catching up people over the bike or the run course (passed over 1400 riders during the ironman nice last year) but this time I was in a better place with strong riders.

T1 was long, around 7′, but that was expected since it’s a very long field (it’s the biggest half ironman in the world with around 4000 competitors) to get out of it. I had some struggle to take out my swimsuit and there was a nice girl who was racing as well and helped me without me asking to unzip my wetsuit, I can’t thank her enough.

Straight onto the bike, I had my power number to follow. Just after a minute my tool bag dropped and i had to get back quite far to pick it up which was rather annoying since i lost a few minute to do so. I kept my focus again and pedalled the flat first section of the course.

I saw a lot of people hammering it hard at first but I kept easy, targeting to get my HR down after the swim and getting ready before the big climb of the day.

Right when the climb started I started to pass people, I was planning to do the 7km climb in z4 and being a light rider made it pretty quick. I was hardly in the red zone during that climb and probably could have pushed a bit more but I guess this has to do it.

When the downhill started it got very technical, I was passing again a lot of people there since I knew the descent pretty well already and I had the route loaded on my garmin where I could anticipate how the next turn will look like.

I drank two/three bottle of mostly isotonic drinks and had 3 gels during the bike, I always forget about nutrition during a race but i had my garmin setup to bug me every 10mn to think about drinking or eating, even tho i don’t do it every 10mn, it always keep me in check if I am thirsty or need gel.

The last 40km of the bike are fairly flat and I started to really hammer the pedals to speed around the 38kh. There was a lot of draftings in this race and a lot of people in my wheel, at one time when I reached to my bidon and slightly stopped pedalling, i had someone behind getting upset because I wasn’t keeping my line (WTF!!!!). Anyway……I kept pedalling and timed it perfectly to be under 3h.

My t2 went faster and did it in less than 3mn, just had some time to put rack my bike sprint to get my shoes put some sunscreen and started running.

I had no target for the run, i just didn’t want to get injured or feel my knee pain again. I did remove most field from my garmin watch and kept only one single field, my HR, so I don’t stress up to run faster.

The run has three loops of 7km and the first few km was very easy, I wasn’t sure of where was I for time but I had the feeling it wasn’t bad and didn’t have any pain.

I still wasn’t sure of my time but I was always under 150bpm on the run, looking at my pacing now, I was right in 5’16 during my run on every laps except when I stopped at the water station. By the last lap I had the idea to go run faster and go over the 155bpm. That was a big mistake because it started to get very hot and humid, so I did the first kilometer at around 5′ but when I started to feel the sun and get really hot my pace dropped very badly around 5’25 for the three last km.

I was very happy to see the red carpet, I sprinted as fast as possible to get there and finished right into a time of 5h41 minutes.

Just after receiving my medal, I am not sure what happened or I guess I know, it was because of the heat but I fainted and literally fall down onto the floor, thankfully recovered a few seconds later before the medics arrived and after getting some food I was well again and just waited for my club mates to arrive to congratulate them. 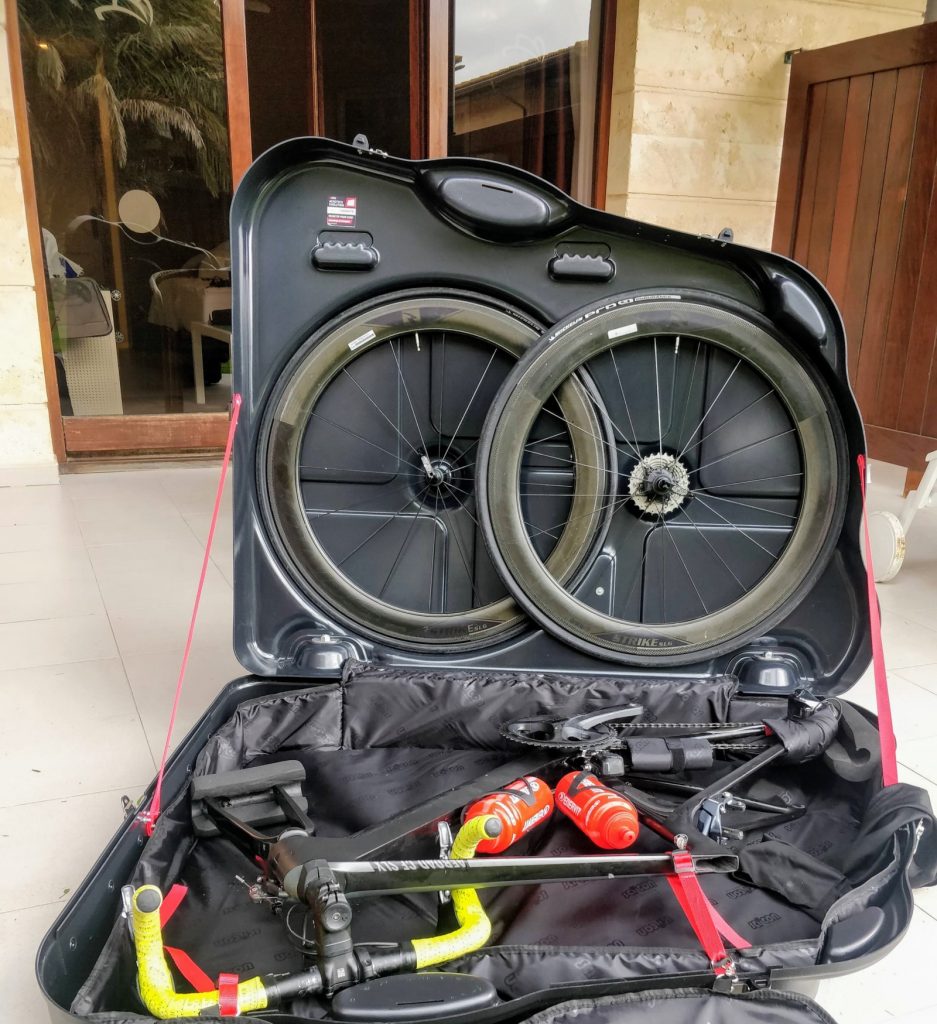 I really enjoyed this race as it was a good race preparation, I reached most of my numbers and didn’t walk during the half marathon even tho I had a 0.80 IF ride and not a bad swim.

I am looking forward for Ironman Nice by the end of June. 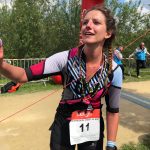 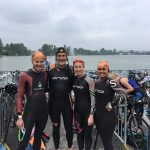