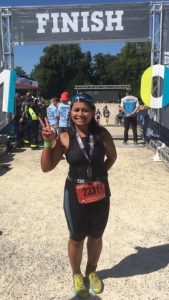 This race is part of Castle Series!

It was a lovely brightly shining sunny day, we were lucky as it was not super freezing unlike previous years. The water temperature was announced at 18 degree so no obligation to wear a wetsuit. 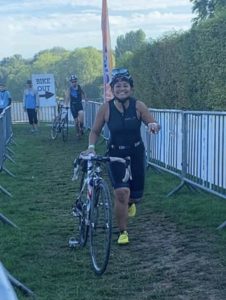 To race here is already a privilege as it took place in the very big royal garden of the Chantilly castle : the swim part was in the royal pond and was full of algues and with the reputation of muddy water. Having some Expatriés doing the same race helped getting rid of my nerves, it was less stressful but overwhelmingly cheerful, also made me feel energised and ready to jump in. Then from T1, it was very pleasant riding through some green and beautiful picturesque counryside, enjoying sightseeing along the way of some charming French villages, beautiful fields, trees, flowers, plants, donkeys, poneys, horses, etc, After T2, kicking off a running portion under shades in the wood most of the times with fantastic views over looking the beautiful Chantilly castle, especially the last two KMs before the finish line was a very nice run through the pretty royal garden crossing two brides surrounded by some colorful flowers & green trees, this made me forget my bad cramps and I could get back to a running properly.

Prior to my race, I have been back only 5 months after having a small break for several months. It’s always hard to get back in a good shape but consistency is the only key. 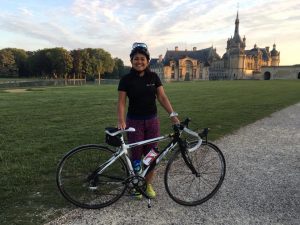 Many hours of trainings with our great triathlon coachs Sylvain, former triathlon champ, Aytug, ITU qualified coach, former pro triathlete. Happy to be with the club thanks and get some great advice to improve my swim technique which I was super slow swimmer. Let’s consider of cutting off from almost 30 minutes for only 700 metres to 39 minutes for more than 1.5 KM comparing last year my swimming time was 49mins. 10 minutes less is amazing to me. Next, as the riding route of the course had been modified due to some construction on previous year where so I rode 42KM for 1h46, happily, this time, my bike split was of 45 KM for 1h40.

A lesson learnt, honestly, this race was to test of new kind of nutrition and I discovered that NOT-to have some solid meals / drink plenty of water at least 3 days before the race could have ruined my race like I ended up having bad cramps and my energy level dropped too so I finished my run portion by walking most of the time. After all, my regular training on swimming / cycling made an outstanding outcome as i smashed my Personal Best on

comparing the same race last year. In exception of running and this will only motivate me to come back to smash my PB next year. However, this means also I improved my fitness level too : stay happy & healthy.

On the top of that, lot of supports from my referee crew and especially my Expatriés triathletes from the same sport club : Expatriés Triathlon de Paris, some of us racing on the same wave or same course, lovely smiles helped booting my energy

My special big thanks go to my Triathlon Club & all coachs, as well all fellow referees & triatletes from other clubs, some training buddies from the east of Paris, especially Torcy crew, many trips Paris-Torcy-Paris of bike-swim-bike, also my appreciation some supporters : family & friends… and all who get involved to this amazing sport.

To continue my fifth year of this enriching journey through triathlon

as a triathlete or an official referee of FFTri (Federation Française de Triathlon) This triathlon is a great fun sport to enjoy, the more, the merrier and your continual support is greatly appreciated. 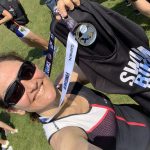 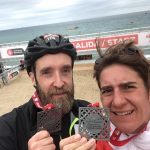