Bike Tech Tip – Dude! That QR is TIGHT! So get off your axle and do something about it!

Over the years and especially working in a bike shop I’ve had the opportunity to deal with far more than my fair share of quick releases (QR). It’s a pretty simple but ingenious bit of machinery invented by Tullio Campagnolo when he couldn’t get his wheel off. There are a few quick release systems out there, but the most common type is the cam-action invented by Campagnolo in the late 1920’s, so that’s the one we’re going to focus on here. If you have DT Swiss style QR levers, most of this document won’t make any sense, but you can always ask me any questions.

A quick history lesson for everyone out there: One snowy November 11th in 1927 a 26-year old Tullio Campagnolo was doing well in the Gran Premio della Vittoria. Unfortunately, as he came across the snowy Croce d’Aune pass, his hands were too frozen to undo the wingnuts in order to flip his rear wheel around and use a different gear. Back then there weren’t any rear derailleurs, so rear racing wheels were made with two gears of different sizes, one on each side of the hub, kind of like a hipster’s flip-flop singlespeed/fixie rear wheel. Think about that next time you change gears before a climb!

What a rider would have to do is a little dance that would slow him down and get him all kindsa dirty. When he got to the bottom of the hill (or the top), he would get off his mighty steed and loosen the wingnuts on the axle to remove the rear wheel. He would then turn the wheel around and put the chain on the opposite freewheel, put the chain under tension, tighten up the wingnuts, hop back on and race off. Check out this picture of the 1914 Tour de France winning bike to get an idea: 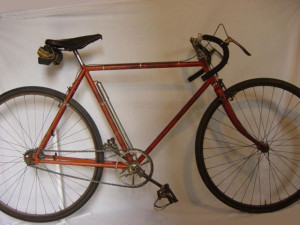 Unfortunately for poor Tullio, in addition to his fingers being frozen, his wingnuts (and potentially other nuts) were probably frozen too, causing him to finish fourth. What did he do? As opposed to preforming a Millarcopter, he just said, “We need to change something in the back,” and  went home and set about creating the first cam-action bicycle quick release in his father’s hardware store. In 1930, the galletti automatici or “automatic wingnut” is patented, and we should all be eternally grateful to Campagnolo.

Now that you know the history, let’s give you a quick lesson in cam-action QR mechanics. As the QR lever is rotated from the open to the closed position, the cam built into the end of the handle applies a push to the quick-release mechanism housing, and a pull to the skewer. Obvious now, isn’t it? 😉

Now here, at last, is the point of this post. I’ve seen far too many people not know how to properly use a QR which can cause any ride to end in tears. Some potential scenarios:

And the grandaddy of them all:

How do you avoid all this? Just put your QRs on properly! It’s easier than you might think.

First off, do NOT just screw the ends of the QR skewer on like it’s a wing nut and try to tighten it like that. This isn’t secure and especially in case you do this with the lever in the closed position, it could open up in the middle of your ride and you’ll come into contact with the ground probably sooner than you want. This one is usually pretty easy to spot since the QR lever should curve towards the inside when it’s closed, or it will actually say “Open” and “Closed” on it. If you’re looking at your bike from the left side and the QR lever says “Open,” you know you’ve done something wrong. 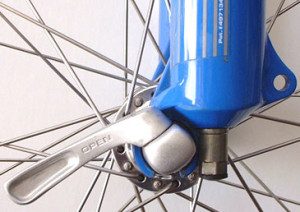 Also don’t tighten them so much you need half the Bulgarian national wrestling team to help you to open the lever. This can lead to metal fatigue and eventual skewer failure.

Next, the opposite of too tight, make sure your QR isn’t too loose. It should be tight enough that you can’t undo the lever with a simple flick of the finger. A too loose QR can also result in a very brief impression of a lycra-clad human cannonball followed by lots of road rash.

So here’s how you should do it:

Tighten the acorn nut on the other side until it is touching the frame. Now open the QR lever and tighten the acorn nut a bit more and close the QR lever again. It should be tight enough that it requires some force to get it closed, but not so much that you feel like you’re giving birth. The closed QR lever should come be positioned before or after the fork in the front and between the chain stay and seat stay of the rear triangle, or just below the chain stay. 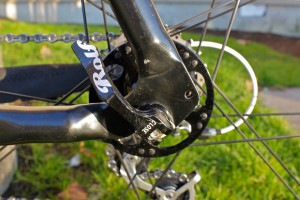 Some mechanics also adhere to the 90° rule, which may be simpler. With the QR lever sticking straight out at 90° to the frame and the wheel properly centered, tighten the acorn nut until it’s relatively tight. Then close the QR lever.

If aero is what you want, you can have the front QR  lever both pointing to the back, parallel to the ground. DON’T point it towards the front! You risk it getting caught on something, flinging it open in mid-ride.

In the same sense, don’t angle the rear QR lever straight back. A rider behind you can get his or her wheel caught between your QR lever and frame, and then you both go down.

Check to make sure your wheel is properly centered in the fork/frame. If it is, great! Close the QR on your brakes and go for a ride. If not, just release the QR and pull up on the wheel. This should seat it firmly at the top of the dropouts. Your QRs are now properly set.

Note that if you have to take the rear wheel off in the future to change a flat or anything, you shouldn’t need to readjust the QR since the rear hub will slide straight up and out of a vertical dropout. For the front wheel, however, you will most likely need to unscrew the acorn nut a bit to create enough space to pass over the lawyer tabs – unless if you’ve already ground them off, but I could never officially advise you to do that since you would be creating a potential safety hazard in case you didn’t know how to use QRs.

Some quick answers to QR questions I’ve gotten in the past:

I’ve heard that not all QRs are created equal. Is this true?
Well this is true for just about everything, but you should know the whole story before you go and throw out your QRs and spend money frivolously. Originally the quick release mechanism was contained in a type of housing or dome. 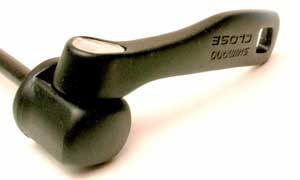 Sometime in the 80’s they changed styles to have the cam mechanism exposed. 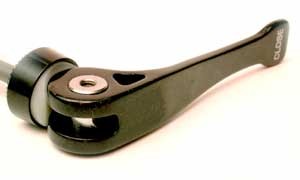 Some people will say that these systems are crap and you should never get them. Admittedly they have their shortcomings, but they aren’t as terrible as “they” might have you believe. Their major problems are that the cam is exposed to dirt, grime, and general crapola and that they switched to aluminum “acorn” nuts from steel. The problem with the aluminum nuts is that the teeth that are designed to bite into your, back then, steel frame are also aluminum and too soft for the steel. So the teeth on them would strip and rear wheels would have a tough time staying put in horizontal dropouts. Today most bikes are made with vertical dropouts, so biting into steel to prevent the wheel from slipping isn’t as important since the wheel can’t move forwards and backwards. Only up and down.

Since these QRs have a 2 piece external cam mechanism, you should also need to make sure that the correct side of the cam washer is facing the lever (it can come off when you take the skewer out of the wheel) and that the lever is seated in the curved part of the cam and not on the “peaks”. Both of these scenarios can result in your wheel coming loose and popping out. 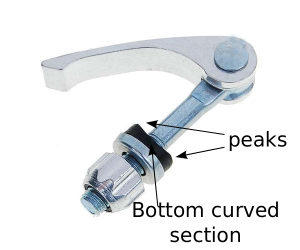 What do you have, oh great bike guru?
Mostly internal cam QRs, but I do have some external-cam models on certain bikes and they work fine, but my vintage rides with horizontal droputs have only internal cam, steel QRs for the reasons I mentioned above.

What are these DT Swiss QRs you talk about and are they better?
The DT Swiss RWS system is kind of like half a wing nut on half of the axle with an adjustable wing. It works quite well, making centering the wheels easier and letting you clamp down very hard, which can be important for mountain bikers and disk brake users. They are a bit slower when it comes to taking wheels off and putting them on and they have been known to have other problems such as teeth grinding smooth/flat, ratchet system rounding off and not really knowing just how tight 15nm is. Should you get them? Only if you’re unhappy with your current QRs or the DT Swiss QRs match your bike and if you have about 70€ you’re willing to part with.

Any other questions or comments? Hit us with them!

And just for fun, check out this great article on how race bikes have evolved over the past 100+ years!

And one last time, Grazie Tullio! 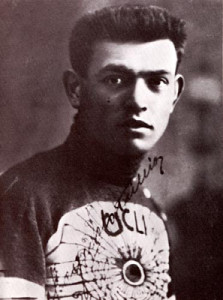 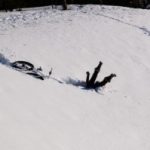 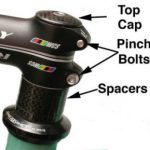