3rd time’s a charm for Chris in Luxembourg 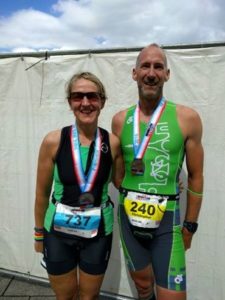 Luxembourg 70.3 was a safe bet…middle of June the water is not too cold, the air temperature usually mild. Perfect for a triathlon. But then the rains came and by Thursday before the race it was confirmed that Luxembourg would join about half the race calendar so far this year by having to change their plans (Dubai shortened swim, Aix no swim, Ventoux cancelled, the list goes on…) we now had a duathlon and 70.3 became 72.3 with a 5k run replacing the 1.9k swim as the currents and flood debris in the river made that unsafe.

This changed the whole story. Part of me was disappointed there was no swim as I’ve raced Luxembourg twice before and wanted a real comparison. Part of me was relieved as had the swim gone ahead it would be really tough fighting the stronger current for a kilometre upstream at the start with the rest of a 70.3 still to go. And part of me was excited as a much stronger runner than swimmer what would this mean for results? The next problem was how to plan for the race? particularly as in a standard Duathlon the first run is the same or longer than the second run while here it was reversed! So…go hard on the first run as your running muscles might get a break on the bike and you could minimize congestion in T1? Go the same speed as you’d planned for the second run as it was upping the running distance anyway? or go more gently to warm up and save your legs for the second run? Hmmm, they all made sense?!

On the wet recce ride on Thursday as I slid across what is usually a beautiful fast descent! and then chatted with one of the handcycle athletes reccing the course from a car, I decided that the first run needed to be taken hard as if the rains came in the bike would be slower than usual (Mallorca 70.3 flashback moment, although now with a no jellyfish guarantee!!) so you wouldn’t be as fatigued coming into T2 as normal. Race plan ready.

At the Friday briefing they explained the 5k would be a self seeded rolling start, it turned out, in the same style as was planned for the swim with about 6 athletes released by marshals every 5secs and your time starting as you crossed the mat. They also recommended coming to the Awards if you wanted a shot at the 70.3 World Champs as roll down places had gone as low as 292nd!!! in age group at a previous race (timing and travelling to Australia putting a lot of people off).

Bikes & Bags racked and a good carb load at a great Italian next to transition with Sean, Cat, Julio, David & Luis (conveniently their sign was my bike place marker) and we were all set for race day.

A final check in transition, taking the tyre pressures back up as the forecast was showing dry til at least the second run and time for a short warm up run and then it was into the pens for the start.

After the pros and the handcycles had gone we were shuffled forward to the lines and then the marshals and then GO! Across the mat and running. My target was around 4:15min/km for the first leg (between my 10k & 70.3 pace) but the first k came in at 3:45…a little quick so backed off and watched my heartrate holding it steady for the one lap course. Luis started further back so we saw each other about 1k apart as we crossed paths after the turn. Then into T1 5.8k later at (a “5k” first run then). With no wetsuit to strip off a fast T1 then out on the bike.

The first 34k is fast and flat along the Mosel River and already the race had a very different complexion. Usually I’m slow out of the water and spend the rest of the race overtaking people but here some slower runners were now on their bikes piling through me at 45kph+ on the first tailwind section. A hard shower gave some pause for thought as to how much water would be on the course later on but then the road turned into the vineyards and the hilly mid section of the course and everyone started to spread out. I settled into a steady effort keeping the cadence high and watching my heartrate. It felt like I was overtaken a lot but I was really glad for the recce ride as I took most of the descents and tight turns much better than the cyclists around me and afterwards the results show I actually net moved up the rankings on the bike. Then finally back down to the riverside for the final flat 15k of the bike leg and the mantra in my head was “Don’t let Luis catch you on the bike” No club rivalry there at all then 😉

The second run started well and at almost the exact same spot on the first lap Luis and I crossed paths that consistent 1k apart! (because of our different start times) It turns out had we started side by side 3 hours later we would have left T2 just 9secs or 40m apart! (and had there been a swim we could well have had a photofinish given our different strengths!)

When I raced Luxembourg 70.3 before the run had been more crowded, having been in one of the last age group waves to go there were already a lot of people on the course which slows things slightly and makes it harder to judge pacing, but here it was much more evenly balanced with very few passes on the first two laps. I was running on heartrate which took me out a little faster than planned but I liked the buffer that gave me on my planned time so settled in and chipped of the k’s keeping an eye out for the other Expatries. The 4 lap course is really nice as it automatically allows you to break the distance down into manageable targets and then it was onto the last lap and time to try and push a little into the finish. Down the chute with a big grin and across the line, tired but feeling the best I’ve ever done at the end of a 70.3! (4:28:40 Splits 0:23:25/2:30:18/1:31:03)

After the finish line time for ice cream! (In my opinion the best post race recovery food) then found the other Expatries all very happy with their performances, although a few legs didn’t quite work (Julio, err I mean Sean). A little after that the news filtered through Cat had come 7th in her age group and I had 8th…Uh oh! time to start thinking if the 70.3 WORLD CHAMPS in Australia might be on the cards!

At the awards the day’s trophies were all done and then the tent almost emptied. Ladies first…For the senior groups about half the slots went to the only person from the age group still there! Then it was Cat’s turn…4 women at the table for 2 slots! Cat had the second SHE WAS GOING TO THE WORLD CHAMPS!!!! (having beaten the 3rd woman by just 1sec!). Next it was the men, it rolled down to my name and very torn but sadly I had to say “No” (other commitments getting in the way). Then Luis, called up and next in line if another Age Group didn’t take their place, but sadly the rest wanted their slots so he cruelly just missed out. So nearly 3 Expatries going to the 70.3 World Championship!!

Overall, I really love this race! The course is great, the venue is compact and the town embraces it! And who knows maybe one day I’ll match this year’s PB on my “swim” if I come back for another go. 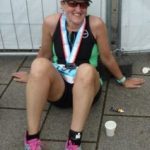